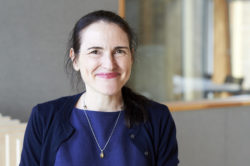 Nicole Coolidge Rousmaniere  is the founding Director and is currently the Research Director at the Sainsbury Institute for the Study of Japanese Arts and Cultures, and Professor of Japanese Arts at the University of East Anglia, Norwich, UK. She was until recently the IFAC Handa Curator of Japanese Art at the Department of Asia, British Museum, and was the lead curator on the Citi Exhibition Manga held in the Sainsbury Exhibition Galleries, British Museum from 23 May to 26 August 2019. She received her PhD from Harvard University in 1998. In 2007 she was the lead curator for Crafting Beauty in Modern Japan at the British Museum. In 2010 she helped facilitate and translate the British Museum’s first manga, Hoshino Yukinobu’s Professor Munakata’s British Museum Adventure. In 2012 she wrote Vessels of Influence: China and the Birth of Porcelain in Medieval and Early Modern Japan (Bloomsbury Academic). Her recent translation of Tsuji Nobuo’s History of Art in Japan was published by Tokyo University Press and won the Japanese Translator’s award prize for 2018. In 2019 it has been reissued as a paperback from Columbia University Press.