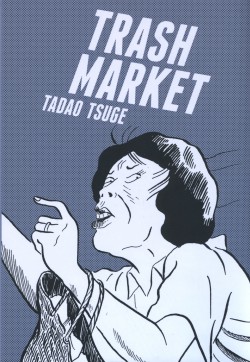 Tsuge Tadao (Edited and translated by Ryan Holmberg)
Published by: Drawing and Quarterly, 2015

Trash Market is a heartbreaking suite of stories pulled from the life of a sensitive observer. Personal, yet belonging to history, Tsuge’s postwar Tokyo is a city of souls set adrift.

Stories include a man who walks away from his desk and disappears for weeks, only to return with no recollection of his wanderings. A married war veteran who wrestles with depression and befriends a young woman. A rebellion that turns bloody. A schoolboy who faces violence and antipathy at home and a group of lowlifes tease and cajole each other as they wait their turn to sell blood to survive.

This material is hardcore. Tsuge Tadao, like his brother Tsuge Yoshiharu, drew for the rental kashihon market before becoming one of Garo’s leading artists in the late 60s. While Yoshiharu is celebrated for his literary craft, Tadao made work that was totally genre-busting: semi-documentary, semi-mystery, mixing photo and drawing, drawing on common period themes like the Disappearing Man (johatsu ningen) and traumatized war veterans suffering flashbacks. Van Gogh makes an appearance, and Domon Ken is lurking in the shadows.

The work is super dark. Some of it is based on Tadao’s experiences growing up poor in Katsushika-ku after the war and then working for dirty blood banks for ten years between the mid 50s and mid 60s. There is an essay by Tadao in the book explaining his youth and time in the blood banks. I also contributed an essay surveying his early career.

And commemorating the release of the book, The Comics Journal online has just published the first of two articles by me surveying how the blood industry in Japan (centering around the practice of baiketsu or “sold blood” by the poor) impacted manga in the late 50s and 60s. This one is about Mizuki Shigeru and the Kitaro, the next one will be about the Tsuge brothers and others.

The The Comic Journal essays, and a portion of the research for Trash Market, were supported by the Sainsbury Institute for the Study of Japanese Arts and Cultures in Norwich, England.

Find out more from Drawn & Quarterly