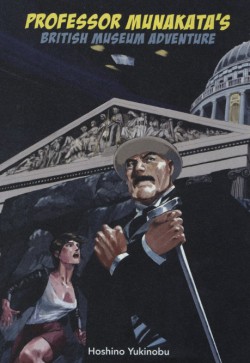 An exclusive series of manga episodes inspired by the iconic objects of the British Museum are now available in English for the first time. First created by Hoshino Yukinobu in 1990, Professor Munakata Tadakusu is one of Japan’s most famous manga characters, with millions of readers eagerly following his adventures in the fortnightly magazine, Big Comic. Following his first visit to the British Museum in 2009, Hoshino was inspired by the unique setting that the museum could offer for a Professor Munakata mystery, and quickly began work onProfessor Munakata’s British Museum Adventure. In the gripping narrative, the Professor, esteemed for his expert knowledge, is invited to deliver a lecture at the British Museum on mythology and folklore. But when the Stonehenge megaliths suddenly disappear during his visit, the Professor must immerse himself in the history and deep-seated rivalries of Europe to foil a sinister scheme that endangers the museum and many of its most important collections. Japanese readers followed the exclusive ten episode series, first published in Big Comic, for five months before the thrilling mystery was bought to a close with a dramatic final scene that sees the Rosetta Stone in grave danger. For review copies, author enquiries or images please contact Sarah Morgan, Marketing and Publicity Executive, The British Museum Press on 020 7079 0946 or [email protected]

Hoshino Yukinobu (b.1954) is one of Japan’s leading manga artists. Creator of the extremely popular seriesProfessor Munakata’s Case Records (serialised in Big Comic, Shogakukan, since 2004), Hoshino has also created a science-fiction series, 2001 Nights, serialised in Japan (Monthly Super Action, from 1984) and American (by Viz).