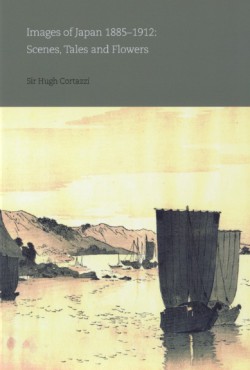 Sir Hugh Cortazzi
Published by: The Sainsbury Institute for the Study of Japanese Arts and Cultures, 2011

In Images of Japan 1885-1912: Scenes, Tales and Flowers, Sir Hugh Cortazzi provides a compelling introduction to the multiple forms of visual material published in Japan for mostly European and American consumption. His carefully researched books is a much-needed addition to this rich and yet surprisingly under explored field. This book is the fruit of many years of researching, collecting and analysing material published in Western languages on Meiji Japan. He set himself an arduous task as the material covers a range of genres from fairy tales to botanical prints. Yet all of the published material he includes have a few unifying factors, namely strong visual composition, utilization of innovative pictorial and publishing techniques and the use of European languages. The sheer range of subject matter reveals the intense and yet diverse interest in Japan during the late 19th to early 20th century. Sir Hugh has carefully introduced each section based on these disparate genres and placed the works into a historical context that also focuses when possible on the author and publisher. The extensive range of images that he has chosen to illustrate is stunning and makes this book a true delight to read and to view.