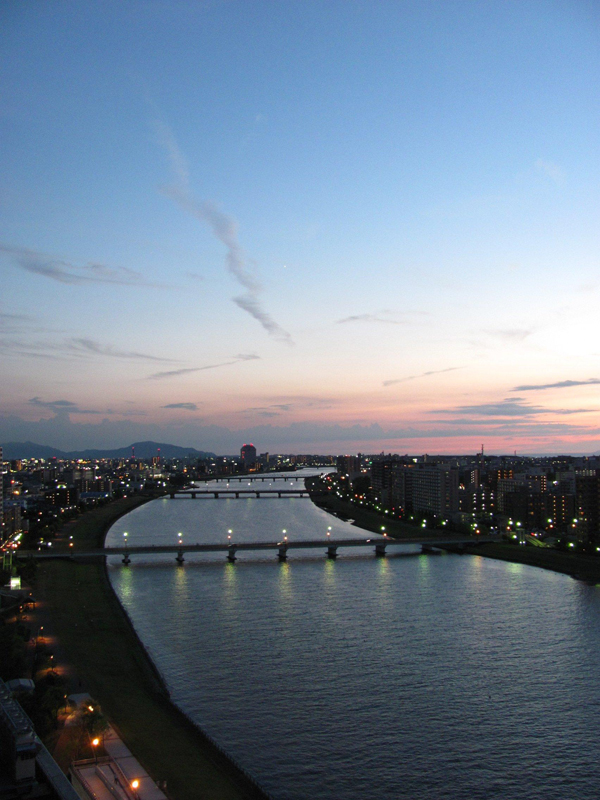 The Shinano-Chikuma River project is investigating the development of historic landscapes along the longest river drainage in Japan. This interdisciolinary and international project includes involvement in the excavation of the Middle Jomon Sanka site in Nagaoka, Niigata Prefecture, and the use of a range of archaeological and geographical techniques to reconstruct aspects of this remarkable landscape.

Throughout Japanese history, rivers have played an essential role in shaping the Japanese landscape and structuring communication, transport and the movement of commodities. Along many of the river systems in Japan, specific conditions have developed which encourage exceptional preservation of archaeological sites. The longest river in Japan is called the Chikuma in Nagano Prefecture where it has its source at Mount Kobushigadake, and the Shinano in Niigata Prefecture, through which it flows before entering the sea at Niigata. Through the Shinano-Chikuma project, we have visited many archaeological sites and museums along the river, and gathered sampled for analysis of what people were eating in prehistory and how the sites developed over time.

Since 2004 we have worked with archaeologists along the longest river drainage in Japan, the Shinano and Chikuma River system in Niigata and Nagano prefectures, on a series of sub-projects investigating the long-term development of historic landscapes in the region. Key project partners include the Niigata Prefectural Museum of History and the Nagaoka Municipal Museum of Science. Starting with involvement in excavations at the Middle Jomon Sanka site in Nagaoka, Niigata prefecture, where the elements that comprise the renowned Flame Pots first came together, we have gone on to hold collaborative research workshops (link to Alsace workshop) and are currently developing plans for a new campaign of fieldwork from 2017.

Workshop on the Archaeology of River Valleys

In December 2011 all of the members of the Shinano-Chikuma Project gathered in the august surroundings of the former Kaiser Palatz in the centre of Strasbourg, and discussed the archaeology of the Shinano-Chikuma River in the context of archaeological work along a number of European rivers including the Rhine, the Boyne, the Severn and the remarkable lake villages of Switerland, southern Germany, northern Italy and Slovenia. Over 100 of the latter were inscribed as a World Heritage Site in summer 2011. This conference was organised in conjunction with the Centre Europeen d’Etudes Japonaises en Alsace (CEEJA) and DRAC, the Alsace Regional Archaeologist. We are particularly grateful to Monsieur Kayser of DRAC and the staff of CEEJA for their support and hospitality.

Our partners in the Shinano-Chikuma Project include the Niigata Prefectural Museum of History, with which the Sainsbury Institute has had an agreement of research cooperation since 2006, the Najomon Museum in Tsunan Town, Niigata Prefecture, the Tokamachi Archaeological Museum, and Nagaoka Municipal Science Museum, and the Kaen Kaido Jomon Renkei Kyokai, a non profit making organisation celebrating the sites along the Shinano River which have produced the famous ‘Flame pots’ of the Middle Jomon period (about 5000 years ago). We are grateful to all of the archaeologists and other colleagues along the Shinano-Chikuma River who have shared their knowledge and research materials with us.