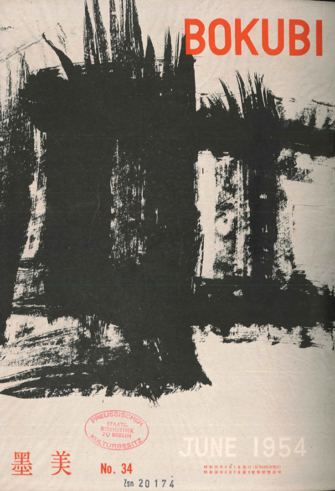 A prominent French critic of abstract art Michel Seuphor wrote in 1962 that “in the 1960s, every abstract painter is fascinated by the East, dreams of visiting Japan, perhaps to find the delights of Japanese calligraphy.”* In the 1950s and 60s calligraphy from Japan was in the vanguard of international art, and Japanese avant-garde calligraphers successfully competed with European and American abstractionists for the attention of art critics and audiences worldwide.

This project aims to include calligraphy from Japan into the larger discussion of postwar avant-gardes. By focusing on individual artists and their networks, this project explores the understudied flows and connections between artists and art groups previously unrelated to each other, decentering the concept of avant-garde in terms of its geographic localisation, but also the art forms it engaged.

The outcome of this project is a book on the Bokujinkai group; an exhibition on 1965 performance in New York; and several smaller publications.

Image: Cover of the calligraphic journal Bokubi from June 1954, featuring a calligraphy by Tsuji Futoshi