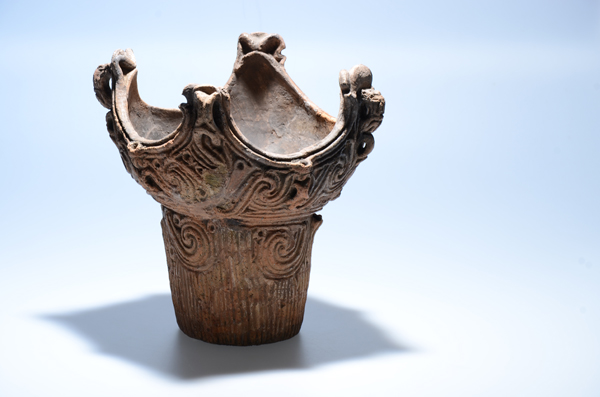 Flame style pots are some of the most enigmatic and evocative objects made by people in ancient Japan. They inspired the artist Okamoto Taro to take an interest in Jomon art and the best examples, from Sasayama in Tokamachi city, are designated as National Treasures. Dating to around 5000 BC they are found mainly along the Shinano River in Niigata Prefecture.

The Sainsbury Institute has worked with specialists on Flame pots since 2001 when we curated the exhibition Flaming Pots: art and landscape in Jomon Japan at the Fitzwilliam Museum, Cambridge, as part of Japan2001, a year-long celebration of Japan in the UK. In 2012-13 we helped with the exhibition Flame and Water Pots at the British Museum, which featured some fine examples of Flame pots.

From autumn 2016 a set of Flame pots on special long-term from Nagaoka will be on display at the British Museum after a short exhibition at the Embassy of Japan in London. They will join an example from the site of Dodaira in Tsunan-machi, which was placed on long-term loan just prior to the London Olympics in 2012. We are supporting the bid to have Flame pots feature in the Tokyo Olympics in 2020.

A good example of a Flame pot, probably also originally from Nagaoka, can be seen at the Sainsbury Centre for Visual Arts at the University of East Anglia.