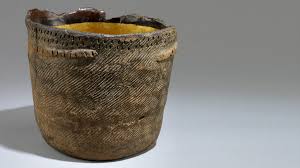 Some of the earliest dated pottery containers in the world were created by prehistoric inhabitants of the Japanese archipelago as early as 16,500 years ago.

Some of these vessels were most likely used to make the oldest known fish stews, as suggested by cutting-edge scientific analyses undertaken at the University of York. Simon Kaner, is Co-Investigator on a project led by Oliver Craig at the University of York investigating food residues on ancient Japanese pottery, funded by the Arts and Humanities Research Council.