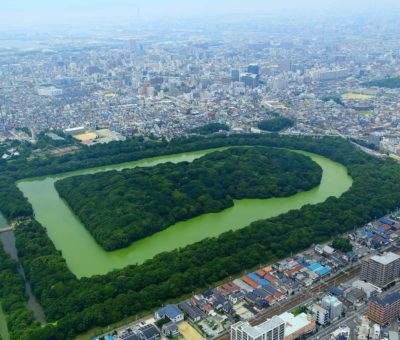 The mounded tombs or kofun of the Japanese archipelago include some of the largest burial monuments of the ancient world. In conjunction with the Japan Section in the Department of Asia at the British Museum we are working with a team of Japanese specialists led by Professor Ichinose Kazuo (Kyoto Tachibana University) and Professor Hishida Tetsuo (Kyoto Prefectural University) on the collection of Kofun period artefacts and archive acquired by William Gowland, one of the Meiji period foreign specialists, who visited, investigated and recorded over 400 kofun while living in Japan between 1872 and 1888.

We are also working with Dr Thomas Knopf (Tubingen University) and have supported two research conferences on Kofun archaeology and we are collaborating with Professor Fukunaga Shin’ya (Osaka University) on a major comparative project about large burial mounds around the world.

The Centre also hosts Luke Edgington-Brown, a PhD student funded through a Collaborative Doctoral Award from the Arts and Humanities Research Council, researching the Gowland Collection.

From the 3rd to the 7th centuries AD, important people in Japan were buried in mounded tombs, accompanied by elaborate ‘grave goods’. Many of these tombs, or ‘kofun’ remain as striking monuments in the Japanese landscape, and include some of the largest funerary structures of the ancient world. A proportion of these tombs, designated as the final resting places of Imperial ancestors, are not accessible for any archaeological research. And some are now being put forward for inscription as a World Heritage Site. The Sainsbury Institute, in partnership with the British Museum, is developing a major new research project about the kofun period. The first two years of this project were documented by NHK for a special programme about the Gowland collection at the British Museum, aired in July 2012. The project will develop to set the kofun in Japan in their East Asian context, and their place in the archaeology of late antiquity in Eurasia.

Workshop on the Current Research in Kofun Archaeology

In conjunction with the Department of Archaeology of the Graduate School of Letters at Osaka University, in July 2012 the Sainsbury Institute hosted the first in a planned series of workshops on the archaeology of the Kofun period. Specialists and students from Osaka and Meiji Universities gave presentations on a series of topics relating to kofun period archaeology, and Professor Chris Scarre (University of Durham) and Professor Martin Carver (University of York) set these in the context of current thinking on European Neolithic megalithic monuments and sites such as Sutton Hoo respectively. Further workshops on kofun archaeology are planned as the kofun project develops.

As part of our collaboration with the Japanese Section at the Department of Asia at the British Museum, a team of Japanese archaeologists are undertaking a comprehensive survey of the Gowland Collection of Kofun period materials at the British Museum. William Gowland was one of the foreign experts (oyatoi gaikokujin) employed by the government of Meiji Japan. He worked in the Osaka Mint from 1872 to 1888. As well as being credited with naming the Japanese Alps, Gowland also investigated over 400 kofun in the area around Osaka, including the Shibayama kofun which he meticulously excavated. The collection he brought back from Japan when he returned to Britain, and the extensive accompanying archive was acquired by the British Museum by Augustus Woollaston Franks. A workshop was held at the British Museum on 3 March 2012 at which the preliminary results of the survey were presented and set in the context of current research on the later Kofun period.

Workshop on the Archaeology of the Three Kingdoms Period in Korea

As part of the Centre for Archaeology and Heritage’s engagement with the archaeology of the Kofun period in Japan (c 250-710 AD), a workshop was held in conjunction with the Department of Archaeology, University of Cambridge, on 4 February 2012 when six scholars of the Three Kingdoms period on the Korean peninsula gave presentations about their latest research. The peninsula was divided into the Three Kingdoms of Koguryo in the north, Baekche in the southwest, and Silla in the southeast until unification under Silla in 668 AD. During this period there was intense interaction between the emerging elites of the peninsula and the Japanese archipelago, resulting in s shared elite material culture ranging from mounded tombs to armour, horse trappings and ceramics. During the first half of the 6th century Buddhism was introduced to Japan from the kingdom of Baekche. The workshop was organised in conjunction with Professor Kim Jong-il of Seoul National University and we are grateful to the McDonald Institute for Archaeological Research and the Department of Archaeology, University of Cambridge for their support.