The Sainsbury Institute was deeply saddened to learn of the death of Professor Donald Keene in Tokyo on Sunday 24 February at the age of 96. The doyenne of Japanese literary studies, Professor Keene was a great friend of the Institute. In 2001 he gave the inaugural address marking the establishment of the Institute, in Norwich Cathedral, on the theme of the Meiji Emperor, a superlative biography about whom he had just completed. In 2003 he gave the inaugural Toshiba Lectures in Japanese Arts about the literati painter Watanabe Kazan, a study subsequently published by Columbia University Press as The Frog in the Well. And in 2009 he gave the inaugural Carmen Blacker Lecture. Dr Carmen Blacker succeeded Professor Keene as Lecturer in Japanese at the University of Cambridge. We extend our sincere condolences to his adopted son Seiki and all who knew and were influenced by him.

Obituaries can be found on: 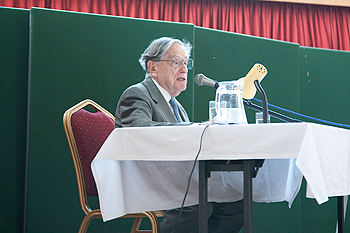