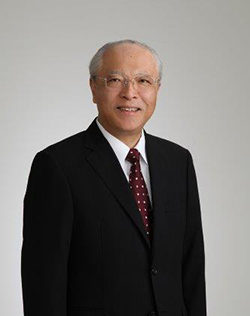 Kimura Tadakazu is an experienced journalist and former President and CEO of the leading Japanese newspaper The Asahi Shimbun. He joined the company in 1976 after graduating from Waseda University in Tokyo. Since then, he has spent more than thirty years primarily on covering Japanese domestic politics and international affairs. In 1994 he was dispatched to Washington D.C. as a political correspondent and in 2005 sent to London as the European writer and Chief of European General Bureau of the Asahi. Until recently, he has served as Executive Managing Editor, Board member in charge of cultural undertaking, and President and CEO of the company.

Kimura received the Award of Tokyo Art Director Club (ADB) in 2009. He was also decorated Honorary Commander of the British Empire (CBE) for his longtime contribution to enhance the UK-Japan relationships in 2014

He is the author/ co-Author of Persian Gulf War and Japan; The Dominant Rule by Takeshita Faction; What’s Going on in European Socialism? and Policy Making and Media; Odd Constructions Heritage in the World.

Kimura intends to read up on the future of the modern Nation State system, continuously threatened by a wave of runaway globalization and IT innovations. Another area of major interest for him is the role of media in promoting democratization and mutual understanding among the diverse global community.