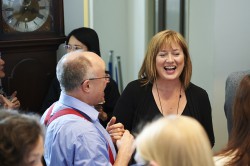 Meghen Jones is a historian of Japanese art with a focus on ceramics, modern craft, and art in transnational perspective. She holds a Master of Arts degree in Industrial, Interior, and Craft Design from Musashino Art University and recently completed her doctoral studies in Asian art history at Boston University. She has received fellowships from the Fulbright Foundation, the Korea Foundation, and the Japanese Ministry of Education. Before coming to the Sainsbury Institute, she was Teaching Fellow in Japanese Studies at Earlham College and Visiting Researcher at the Crafts Gallery of the National Museum of Modern Art, Tokyo. Her dissertation, “Tomimoto Kenkichi and the Discourse of Modern Japanese Ceramics,” examines the art, praxis, and theories of Tomimoto Kenkichi (1886–1963) as a case study for illuminating the central mechanisms responsible for the emergence and development of modern Japanese art ceramics. This analysis reveals not only Tomimoto’s complex individual role as one of the foremost leaders of modern ceramics, but it also sheds light on the ontology of modern Japanese craft itself. Tomimoto’s praxis, synergistically modeled on William Morris and Ogata Kenzan, reveals a modernist stance towards Japanese literati culture in which ceramics became a medium negotiating between British Arts and Crafts design; modernist European sculpture; and Chinese, Korean, and Japanese historical ceramics. As a Sainsbury Fellow, she will revise her dissertation into a book manuscript by considering Tomimoto’s ceramics, two-dimensional arts, and written discourse within the global context of modernism and twentieth-century ceramics.