Treasures from the ancient Japanese mounded tombs: current research on the Gowland Collection 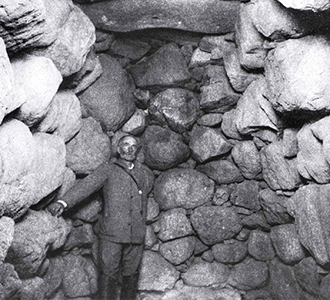 A half-day symposium where Japanese and British specialists will present the findings of their major research project into the Gowland Collection of Kofun period materials (3rd-7th centuries AD) held at the British Museum. These artefacts and archive, acquired by William Gowland during his long sojourn in Japan in the later 19th century, comprise a unique collection outside Japan, illuminating both the history of Japanese archaeology and the origins of the state in Japan, when rulers were buried in some of the largest burial monuments of the ancient world

Image:
Gowland standing in the main burial chamber of one of Tsukahara Kofun group mound © Trustees of the British Museum

This lecture is co-organised by the Sainsbury Institute for the Study of Japanese Arts and Cultures, and the British Museum