The Expression of the Four Seasons in Japanese Paintings 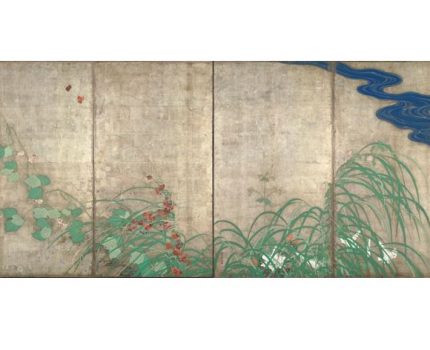 Japanese climate is customarily represented by four distinctive seasons. Over the centuries, Japanese people have appreciated paintings with subjects of those four seasons; some are depicted on byōbu (folding screens) and kakejiku (hanging scrolls) formats. During the Edo period (1603-1867), a vast number of paintings themed with the four seasons were produced, among which seasonal flowers and plants were the most important subjects. The best examples of those were painted by Rinpa artists. Rinpa, which literally means ‘school of Kōrin’, derives its name from Ogata Kōrin (1658-1716), one of the most celebrated artists during the Edo period. Ogata Kōrin was born in Kyoto into a wealthy family that ran a kimono shop whose clients included imperial families, the powerful samurai class and noble families. Kōrin created many artworks depicting the seasonal flowers and plants with his talented artistry and design where his accomplished brushworks seem to have furnished short-lived flowers and plants with eternal life and beauty. Kōrin’s works of art greatly influenced many artists from later generations, one of whom was Sakai Hōitsu (1761-1829). Born as the second son of a feudal family, Hōitsu was also a prominent haiku poet as well as an artist. His works are known to be styled with poetic sentiment and delicate aesthetic sense. Kōrin, Hōitsu and their related artists are referred to as Rinpa artists. In this lecture, the techniques and expression that artists in the Edo period employed to depict the Japanese four seasons will be revealed.

Tomoko Emura is Head of the Archives Section, Department of Art Research, Archives and Information Systems at the Tokyo National Research Institute for Cultural Properties (Tobunken). She is a specialist in history of pre-modern Japanese art with a particular interest in paintings especially by Rinpa artists. She has published many scholarly essays, which include Classism in the Works of Ogata Kōrin and Ogata Kōrin’s Time in Edo and Changes in His Brushwork: Focusing on A Budding Plum Tree in the Freer Gallery of Art. She is currently involved in a research project on the restoration of traditional techniques and materials employed to cultural properties in Japan. She is also leading an exhibition titled ‘The Allure of Japanese Art: A Homecoming of Overseas Artworks Conserved in Japan’ to be held at the Tokyo National Museum in January 2021, where part of the research outcomes will be exhibited.

THIS EVENT IS NOW FULLY BOOKED (If you’ve already booked onto this event but no longer can make it, please let us know as there is a waiting list) 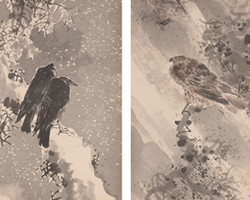 A Pair of Scroll Paintings: the Triple Images of Yosa Buson’s “Kite and Crows” 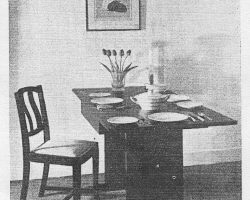 Ukiyo-e Printmaking and the Arts and Crafts Movement