Shunga: An Invitation to Pleasure? 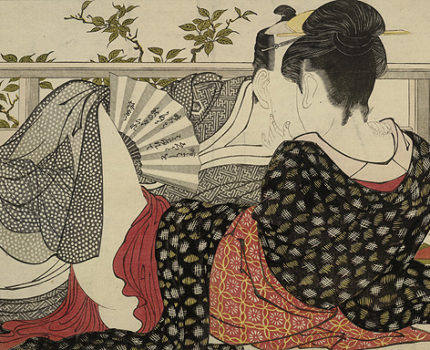 Tim Clark
Head of the Japanese Section, Department of Asia, The British Museum

Every Third Thursday of the month, the Sainsbury Institute for the Study of Japanese Arts and Cultures hosts a lecture on a topic related to the art and culture of Japan. Talks begin at 6pm (50-minute lecture followed by refreshments). Speakers are all specialists in their field and the talks are intended to be accessible to those with no prior knowledge of Japanese history. Admission is free and all are welcome. Booking essential. To book a seat email us at [email protected] or fax 01603 625011 up to two days before the lecture stating your name, number of seats required and a contact number. Unless indicated otherwise the lectures are held at the Norwich Cathedral Hostry (Weston Room), Norwich NR1 4EH. The Third Thursday Lecture series is funded by the Great Britain Sasakawa Foundation and the Robert and Lisa Sainsbury Charitable Trust.

In early modern Japan, 1600-1900, thousands of sexually explicit works of art were produced, known as ‘spring pictures’ (shunga). Tim Clark is currently curating at the British Museum a major shunga exhibition, which celebrates this often tender, funny and beautiful erotic art-form, produced by some of the great masters of Japanese art such as Utamaro and Hokusai. Shunga is in some ways a unique phenomenon in pre-modern world culture, in terms of the quantity, the quality and the nature of the art that was produced. Showing some key works from the exhibition, Tim will explore important questions about what is shunga, how it circulated and to whom, and why it was produced. In particular, he will introduce the social and cultural contexts for sex art in Japan, reaffirming the significance of shunga in Japanese art history.

We are putting the following advisory on all publicity for the show, which you might also like to consider: ‘Includes content of a sexually explicit nature. Parental guidance advised for under 16s.’

Tim Clark is Head of the Japanese Section in the Department of Asia at the British Museum. He has authored and co-authored many books about aspects of Japanese art, including ukiyo-e painting, Kyōsai, Utamaro, early ukiyo-e, images of Mt Fuji, Hokusai, Osaka ukiyo-e and Kuniyoshi. He curated and wrote the catalogue for the 2009 exhibition Kuniyoshi from the Arthur R. Miller Collection, held at the Royal Academy of Arts, London. In 2011 he published a small monograph for British Museum Press, Hokusai’s Great Wave. Clark is curator of the exhibition and co-editor, with C. Andrew Gerstle, Aki Ishigami and Akiko Yano of the catalogue Shunga: sex and pleasure in Japanese art (2013).