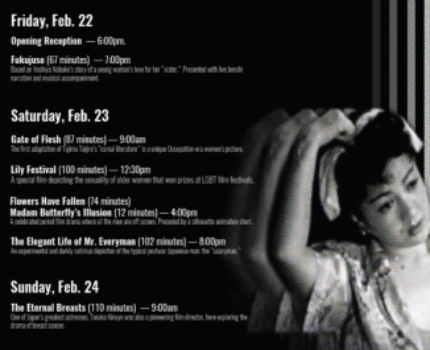 The Kinema Club conferences on Japanese film and media have distinguished themselves over the years for their variety and inventiveness, ranging from workshops to full-fledged conferences, from themed symposia to sidebars of film festivals. This edition is a new step even for Kinema Club, in that it will center on screening and discussing rare films. After each film or set of films, a panel of 3-4 members begin discussion not by reading prepared papers, but by each member offering comments. The theme of KC XVIII is “Gender and Sexuality in Japanese Cinema.” Japanese cinema has long been explored through its treatment of gender and sexuality, from the modern women of Mizoguchi to the masculine fantasies of yakuza films, from the obscured eroticism of roman porno to the beautiful fighting girls of anime. In selecting this theme, the organizing committee wishes to invite new perspectives on the visual construction of gender and sexuality in Japanese media by screening films rarely seen which scholars can position to intervene in ongoing conversations about gender and sexuality.

Dr Jennifer Coates, Senior Lecturer in Japanese Arts, Culture and Heritage will be giving a talk titled “What Price Elegance?: Romance Under Capitalism in the Films of Okamoto Kihachi”