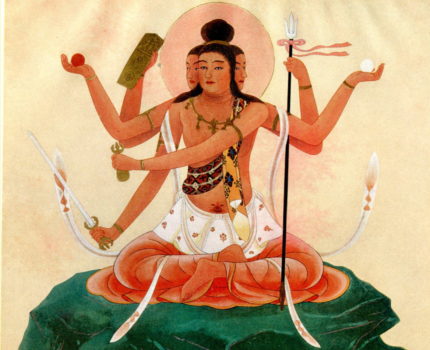 In 1934, a devastating typhoon hit central Japan and caused the total destruction of the five-story pagoda at the Temple of the Four Heavenly Kings (Shitennōji), one of Japan’s oldest Buddhist temples located in the heart of Osaka city. The city government quickly decided to reconstruct the entire pagoda on the same site. This plan resulted in the unprecedentedly large-scaled, multi-media neo-classical monument, produced by multiple creative talents, including a well-known Salon painter, Dōmoto Inshō (1891-1975). While he and his supporters attempted to present his icon murals in the pagoda as a prime example of modern “religious art,” the patrons of the project, concerned with the entirety of this architectural-pictorial enterprise, had their own agendas specific to the time and place of the project. The presentation will examine the discrepancy between the motives held by the artist and those of the patrons of the projects in relation to contemporary social, cultural and political issues.

Yasuko Tsuchikane (Ph.D. Japanese Art History, Columbia University) is an adjunct assistant professor at Cooper Union in New York, and currently serves as a Robert and Lisa Sainsbury Fellow at the Sainsbury Institute for the Study of Japanese Arts and Cultures. Her current research includes the social networks dedicated to the production and reception of modern art in historical Buddhist temples, which resulted in her article, “Rescuing Temples and Empowering Art: Naiki Jinzaburō and the Rise of Civic Initiatives in Meiji Kyoto,” in Alice Tseng and Morgan Pitelka eds., Kyoto Visual Culture in the Early Edo and Meiji Periods: The Arts of Reinvention (Routledge).  She is also working on a book project, Dōmoto Inshō (1891-1975) and the “Sacred Art World”: the Making of Modern Temple Art in the Twentieth Century. Another area of major interest for her is the study of the intellectual discourse on ceramics in modern Japan, which she has explored in “Picasso as Other: Koyama Fujio and Polemics of Postwar Japanese Ceramics” for the current issue of Review of Japanese Culture and Society.