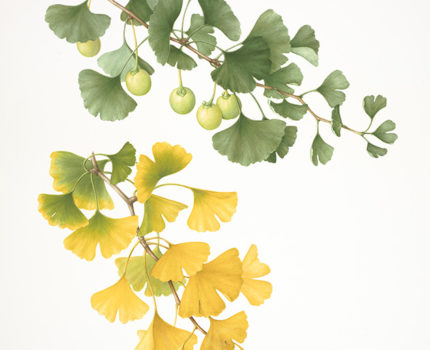 One of the most beautiful, colourful and precise of all technical drawings, botanical art has taught us much about the complex world of botany and continues to enthral many of us to this day. Its history is rich and extensive,and the horticultural regions covered are equally vast. As Japan engaged with the West, botanical images of Japanese plants and flowers were relayed back to Europe by Westerners. They appeared as reproductions in much coveted publications such as Philipp Franz Balthasar von Siebold’s Flora japonica (1835–1870) and Engelbert Kaempfer’s The History of Japan (1727), and stoked curiosity and imagination about the flora and fauna of the lands in the Far East.

To celebrate the third Toshiba Lectures in Japanese Art and Science, the Sainsbury Institute invites Masumi Yamanaka, one of the most celebrated botanical artists working at the Royal Botanic Gardens, Kew, to guide us through the world of horticultural images. She, joined by Dr Nicholas Hind and Dr Mark Nesbitt (both from Royal Botanic Gardens, Kew) in her first and second London lectures respectively, Masumi will explain why botanic art is much more than ‘pretty water-colour’ paintings.

Masumi Yamanaka moved to London in 1987 to work for Marks & Spencer as a ceramic designer. She has since worked for ceramic manufacturers and retailers such as Royal Doulton, Portmeirion, The National Trust, Vista Alegre (Portugal), and Crate & Barrel (U.S.A), before studying botanical illustration under the renowned botanical artist Pandora Sellars. Masumi has shown her work at the Royal Horticultural Society (RHS), including a series of Camellias at the London Flower Show, for which she was awarded a Silver-Gilt Medal. Further prestigious recognitions include the Margaret Granger Memorial Silver Bow from the Society of Botanical Artists and a gold medal from the RHS in 2010. Her work has been featured in a number of key exhibitions including the Kew’s Shirley Sherwood Gallery of Botanical Art exhibitions on Trees (Winter 2009), Bulbmania (Summer 2010) and Kew Artists (Spring 2011). In 2015 the Shirley Sherwood Gallery staged an exhibition of Masumi’s work illustrating Kew’s Heritage Trees, which included some of the oldest and most iconic specimens in the Gardens. The accompanying publication titled Treasured Trees received critical acclaim. Masumi’s work is held in both public and private collections throughout the world. She is Japanese Exhibition Coordinator at the Royal Botanic Gardens, Kew and has been a freelance artist based in the Herbarium since 2007.

The Japanese Collection at Kew