Home/ e-Magazine/ Issue 26: May 2019/ Japanese art exhibitions outside of Japan

Japanese art exhibitions outside of Japan

Spring has brought a lovely warm breeze here in Norwich and the whole city is getting greener and greener as days go by. The long-awaited biggest ever Manga Exhibition opens at the British Museum from the 23rd May until the 26th August. Manga, used to be seen as Japanese sub-culture, is now one of the most popular cultures not only in Japan but also in the world. This issue will feature two exhibitions that introduce manga from different perspectives. I hope you enjoy manga this summer.

The Tale of Genji: A Japanese Classic Illuminated

The Metropolitan Museum of Art
On now until 16th June 2019

The Tale of Genji (Genji monogatari) unquestionably stands at the pinnacle of classic Japanese literature. The Met’s The Tale of Genji: A Japanese Classic Illuminated is the largest and most comprehensive ever exhibition on such classic literature as the Tale of Genji. This is certainly the first ever Genji exhibition to select traditional artworks alongside contemporary manga in the same space. The tale consists of 54 chapters with almost 800 waka poems in situ. This great work was written by Murasaki Shikibu, a lady-in-waiting in the early 11th century Heian imperial court, and was originally intended for the female reader. She wrote the tale in kana, so-called onna-de, womens’ hand, which is a phonetic script invented by women, as opposed to Chinese characters used by men. It has been translated into English repeatedly since the early 20th century. The Tale of Genji has inspired artists for over 1000 years since it was written. The Met’s Genji exhibition introduces a wide range of Genji-inspired artworks, which include two National Treasures, several Important Cultural Properties from Japan and the Ishiyamadera Temple Collection that has previously never left Japan. In addition to that, it is a well-nigh revolutionary endeavour that colourful illustrations of manga Asakiyumemishi (Dreams at Dawn) by Yamato Waki are included.

The emergence of the manga version of the Tale of Genji was perhaps a natural development. Yet, Yamato’s Dreams at Dawn is exceptional among all other Genji manga. It has become overwhelmingly popular since it was first published in a monthly girl’s comic magazine in 1979, ending in 1993 after 14 years. Yamato succeeded in visualising the entire 54 chapters of The Tale of Genji faithfully adding her own interpretations since details in the original can be ambiguous or even undepicted. Meticulous detail produced by thin pen lines recreate the world of an exuberant Heian court that we only could imagine through looking at old paintings and reading classic literature. The complexities of the characters’ interactions are unravelled by her skilful depictions. She also successfully invites readers into the psychology of the main characters in each scene using dramatic background effects. In addition to her artistic achievement, Dreams at Dawn has made The Tale of Genji, one of the most intricate and lengthy texts in Japanese classic literature, more accessible to young readers and helped them understand the whole story, without reading the original. Although originally created for girls for pleasure reading, I believe that many girls, and possibly boys as well, read Dreams at Dawn to understand their compulsory school classic of The Tale of Genji. Visitors will undoubtedly enjoy the gallery spaces, contrasting between traditional Genji-inspired artworks and the contemporary Genji manga of Dreams at Dawn, that the curators have cleverly created.

A exhibition catalogue by the curator John T. Carpenter, Mary Griggs Burke Curator of Japanese Art, and the co-curator Melissa McCormick, Professor of Japanese Art and Culture and Harvard College Professor at Harvard University, is available. For those who cannot quite reach New York in time, there is a virtual option. All the exhibited works are available for browsing through the Met’s website. For those lucky enough to make the trip, I am sure the website will offer a nice preview to whet your appetite before your visit. I would also recommend reading the co-curator Melissa McCormick’s The Tale of Genji: A Visual Companion, published in 2018 by Princeton University Press. If you are interested in the English version of Dreams at Dawn, it is now available online.

Mangasia might be the first and largest exhibition to embrace comic cultures from East, Southeast and South Asia all together. Japan as the centre of the show but it presents the whole sphere of comic cultures across two dozen of Asian countries from China, India, North and South Korea to smaller countries, such as Bhutan and East Timor. Many of these items – 280 pages of original comic book artworks, 116 high quality facsimiles and 200 rare printed comics – have been rarely, if ever, shown outside their country of origin. From Japan, more than 30 manga artists are introduced. This touring exhibition, organised by the Barbican Art Centre in London and curated by Paul Gravett, had its first show at Plazzo delle Esposizioni in Rome in October 2017 and travelled to Monza, Italy and Nantes, France last year. Unfortunately, the show scheduled for April in Shenzhen, China, has been cancelled, however it will be back on show in Bangkok later this year.

The exhibition is organised into six sections: Mapping Mangasia, Fables and Folklore, Recreating and Revisiting the Past, Stories and Storytellers, Censorship and Sensibility, and Multi Media Mix. Mapping Mangasia surveys histories of comic cultures in the presented countries. Manga has spread worldwide in the 20th century and has continued growing. The exhibition demonstrates that subjects are almost infinitely diverse. They varies from artistic creations, current trends, social and political issues to histories, beliefs, folklore and classic literature, which then each range from children’s stories to adult-only fantasies. Defining the term, ‘manga’, as comics created in Japan in the exhibition, it introduces the term ‘manga’ in different countries. For example, manga in Chinese is ‘lianhuanhua’ (it seems that ‘manhua’, written in the same characters as manga in Japanese, is historically used and, I believe, it is still used), and ‘manhua’ in Korea. Indonesians call it ‘cergon’ while Filipinos call it ‘komiks’, which sounds the same as ‘comics’ in English. 19th century Ukiyo-e woodblock prints are also on display to represent the history of manga along with a contemporary woodblock print of Ghost in the Shell by Masamune Shirow, created in 2017. It is enjoyable to view the wide range of manga, its histories and the different topics that each country has been interested in and concerned about over the past decades. The manga journey ends with the Multi Media Mix section where you see and even interact with manga-influenced creations – great if you are manga otaku or just a manga lover. The section appears to be dominated by Japanese productions, which possibly indicates how omnipresent and perhaps dominant manga can be in Japanese culture and society. The relationship between manga and other media is definitely increasing. The strong bond between comics and animation continues though I feel it might be less so than 80s and 90s when I grew up in Japan. However, video games and figurines of manga characters are ubiquitous all over the world. Moreover, the digital version of manga has been increasingly more available like Dreams at Dawn, The Tale of Genji, mentioned in the article above. Mangasia certainly provides visitors with a good depth of knowledge on the overall history of comic cultures in Asia. I personally hope that Mangasia will be on show in the UK in future.

The exhibition catalogue, Mangasia: The Definitive Guide to Asian Comics, by the exhibition curator Paul Gravett, is also available. 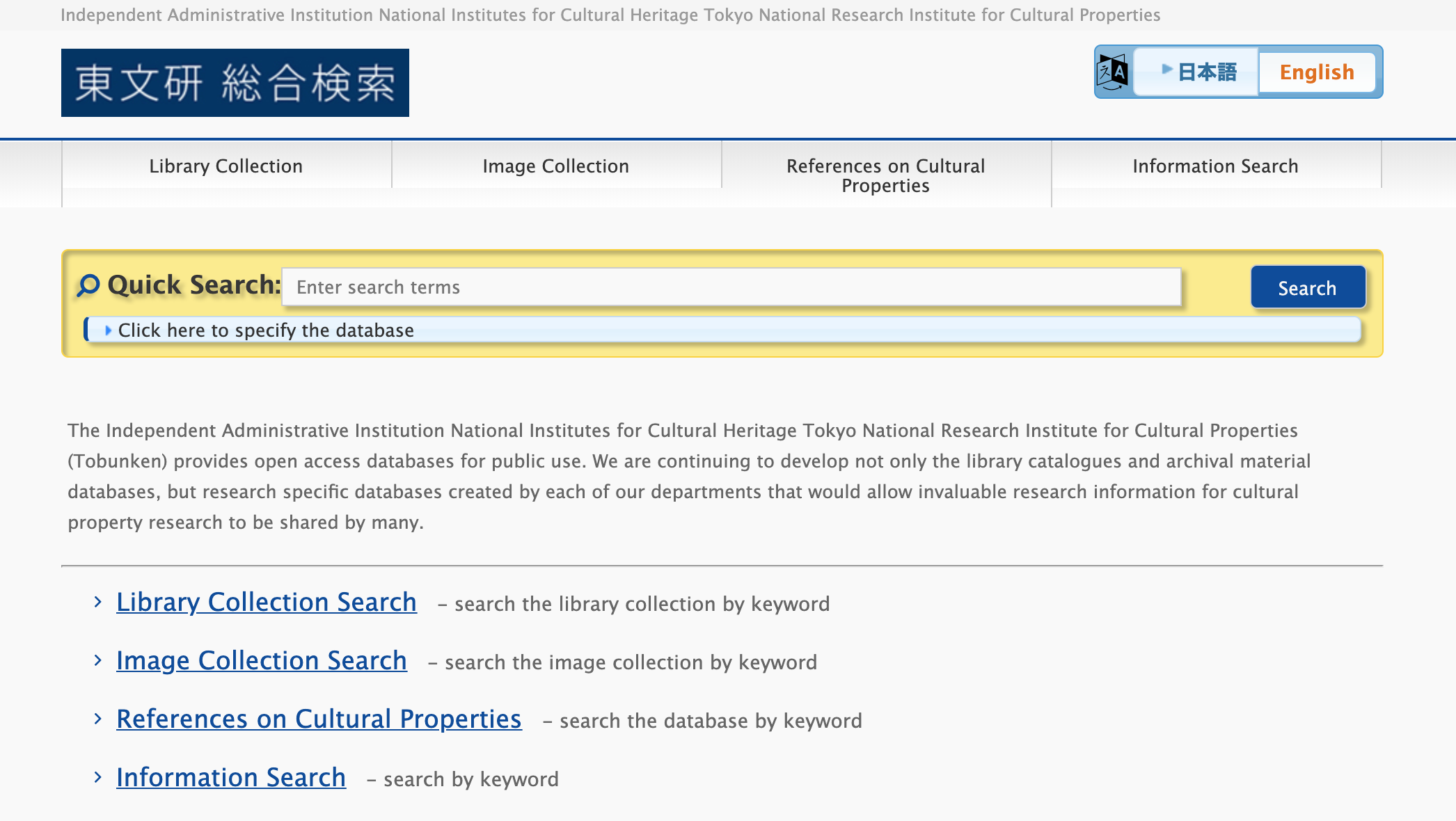 All the exhibition details and publication information introduced here, and more, can be found on the comprehensive research database, developed by the Tokyo National Research Institute for Cultural Properties, known as Tobunken. As a research partner of Tobunken, the Sainsbury Institute contributes by gathering data and information on Japanese art exhibitions taking place outside of Japan and publications written in non-Japanese languages.