From the Curator: Manga at the British Museum

Down the rabbit hole

This exhibition marks an exciting new departure for the British Museum. From 23 May to 26 August 2019 the largest exhibition of manga ever held outside of Japan is coming to the Sainsbury Exhibition Galleries. Japanese comic books or graphic novels with a twist, serialised in scores of newspapers and magazines, Manga are now read by a large global audience. This is immersive storytelling through pictures, where image rules supreme over word. There is minimal use of text and the narrative is created through expressive line drawing, symbols, composition of panels and the visual development of character.

As a result, readers are instantly drawn in and often start to identify with a specific manga or character. ONE PIECE, created by Oda Eiichirô for Shueisha in 1997, is a perfect example. It is still going from strength to strength and has filled 92 individual volumes (tankôbon) with over 450 million books in circulation around the world, making it the best-selling manga of all time and winning a place in the Guinness Book of World Records. It was even recently made into a Kabuki theatre play to great acclaim, revealing the power of manga to blend with other genres and appeal to audiences both popular and rarified. 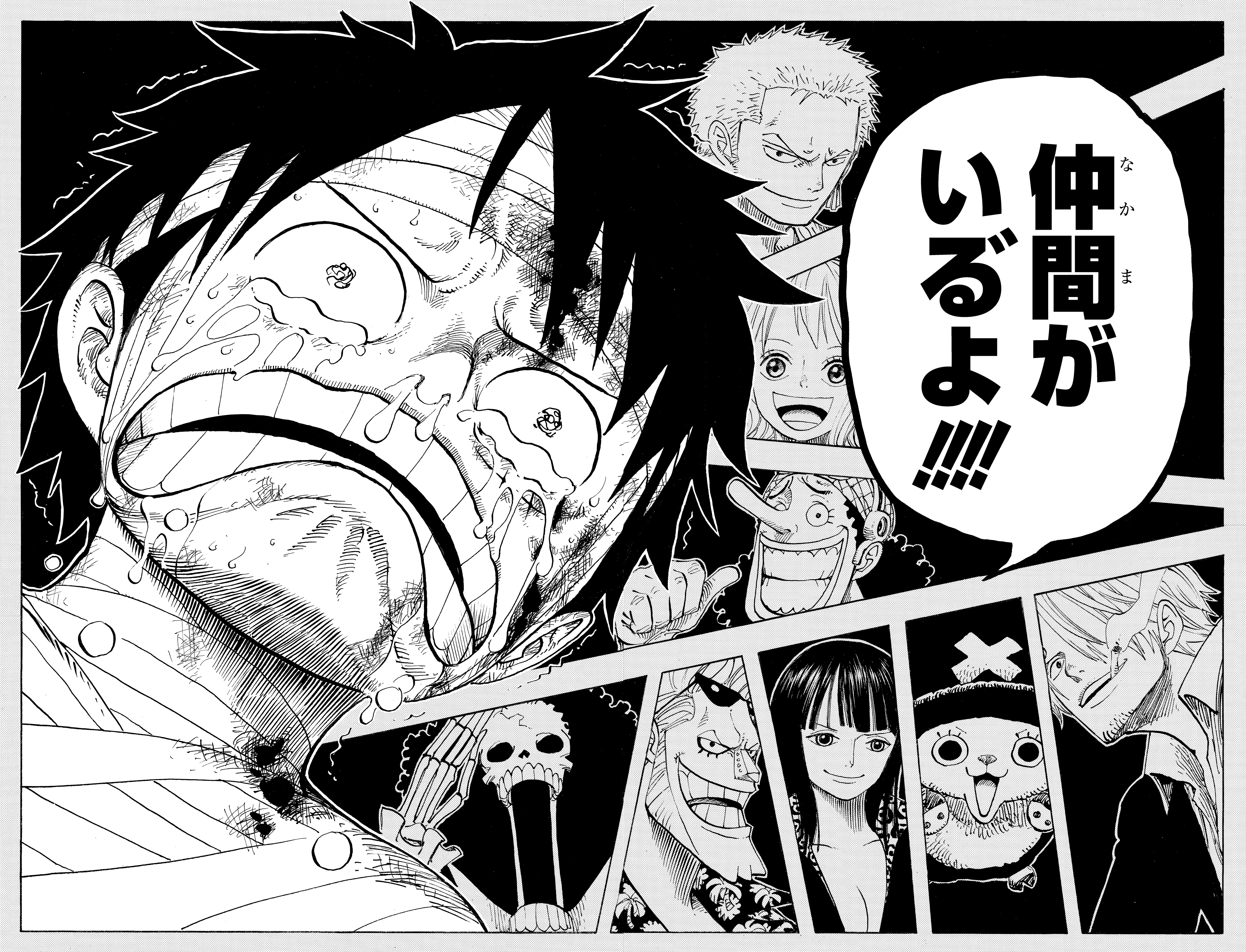 The Citi exhibition Manga マンガ will showcase about 50 manga artists, 70 titles and 160 works – from historical art to digital experiments – bringing together the best examples from the past to the present and pointing to the future of this exciting medium. A catalogue and an extensive events programme accompanies the exhibition. The exhibition demonstrates that manga’s roots are international, but the form as we know it today developed in Japan in the late 19th through to the 20th centuries and has recently achieved global reach. The manga phenomenon is expanding and includes animation (known as anime in Japan), art, fashion, street art, graffiti, and newly developed forms such as digital multimedia and gaming. It is a multi-billion pound industry, one that is super-fuelled by its readers and viewers. With hundreds of genres, from sports, love, horror and ageing to global threats and sexual identity, there is a manga for everyone.

In our image-led, Instagram-influenced world, manga is a wonderfully accessible art form. It feeds an international audience hungry not just for pictures but also for visual stories that have resonance. Many manga are now translated into other languages, but also mobile technologies with translation apps make the once inaccessible elements of Japanese script downloadable and available on your screen.

If popular, a manga may become the basis for an anime series or a full feature-length film. Golden Kamuy is a relatively new manga which has published about 100 million copies as of June 2019 and has been made into a popular anime translated into English. Written by Noda Satoru, it is a dramatic action tale that takes place in the early 1900s on the northern island of Hokkaido. The hero, ‘Sugimoto the immortal’ teams up with a local, resourceful Ainu girl named Asirpa and attempts to locate gold stolen from the indigenous Ainu community, in a deadly race with the Japanese Imperial Army 7th Division and other assorted and often unsavoury  characters. Noda researched all aspects of the manga including eating the food portrayed. The manga is as gripping as it is beautiful and you learn about Hokkaido and Ainu customs as you become absorbed in the story. 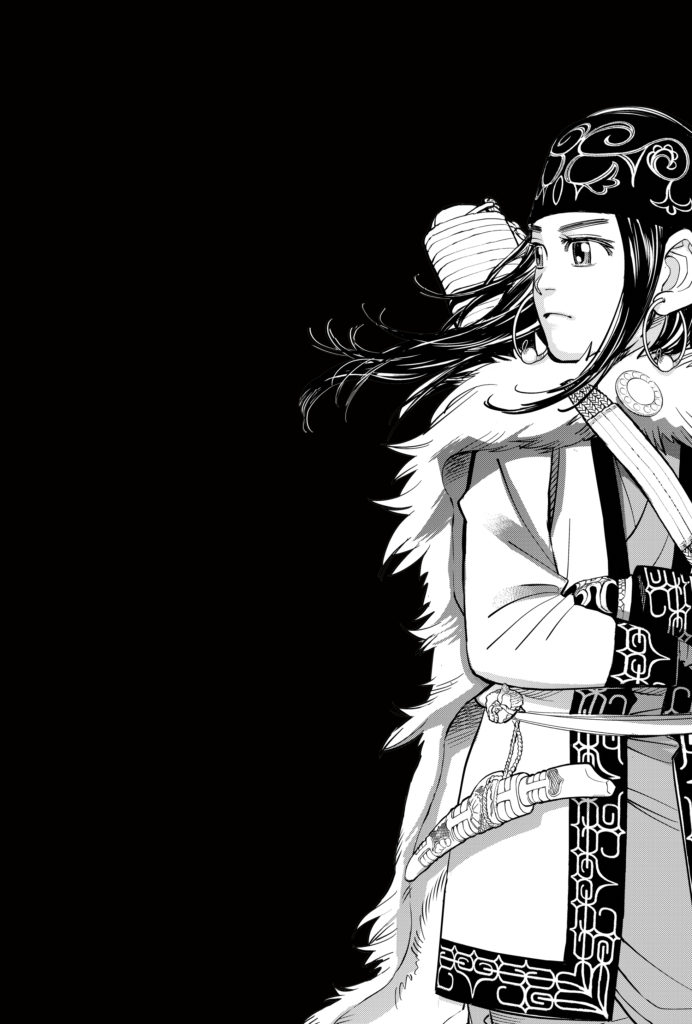 The British Museum houses a large number of Ainu-related items and some key examples are currently on display in the Mitsubishi Corporation Japanese Galleries in Room 92 including Kaizawa Toru’s (b. 1959) enigmatic Kewtum kanna-suy, ‘Spirit Reborn’ [JA 2018,3016.1]. Indeed it was Kaizawa who introduced the manga series ‘Golden Kamuy’ to the British Museum. Kaizawa and his fellow Ainu artists’ influence can be seen on the careful articulation of the blade sheaf hanging from Ashirpa’s belt in the lead image for the exhibition. 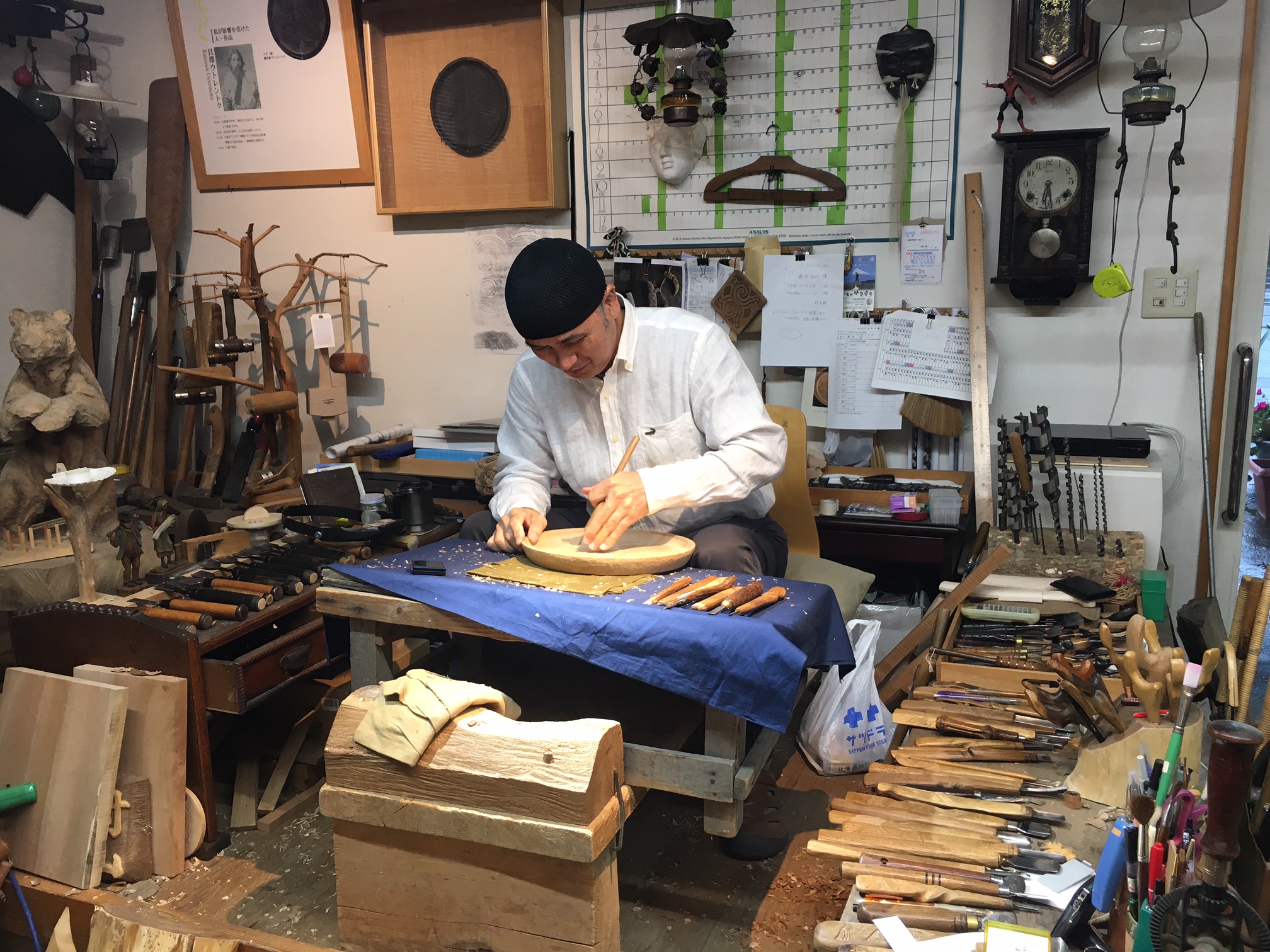 Manga is produced in different formats and more recently on your mobile device, which lets you adapt how you wish to read it (keitai manga). Traditionally, manga is read from the upper right to lower left corner of a page. Different Japanese manga printed formats include the simple four panel manga (yonkoma), mostly seen in newspapers or on mobile phones; magazine compendiums of serialised manga artists (shûkanshi, gekkanshi), and individual books of specific manga or authors (tankôbon). There are also fanzines or independently published or fan created comics (dôjinshi). The brilliant manga artist Kôno Fumiyô has recently published a book of 4-panel manga called Giga Town: album of manga symbols in order to help us understand the grammar and symbols embedded in manga. Drawing animals based on a 12th-century handscroll (Chôjû giga emaki) originally in Kôsanji temple, Kyoto, Kôno makes these manga symbols, called manpu, come alive. Here we see her heroine Mimi-chan, a young white rabbit, racing a turtle which could be straight out of Aesop’s fables to explain the meaning of the use of spirals in manga, namely to show something spinning, for instance to express speed, or dizziness in a character’s head. Kôno has created for this exhibition a bespoke series of Mimi-chan’s as an avatar for visitors. One of her bespoke creations depicts Alice’s rabbit transforming into Mimi-chan (the word mimi refers to ears in Japanese). 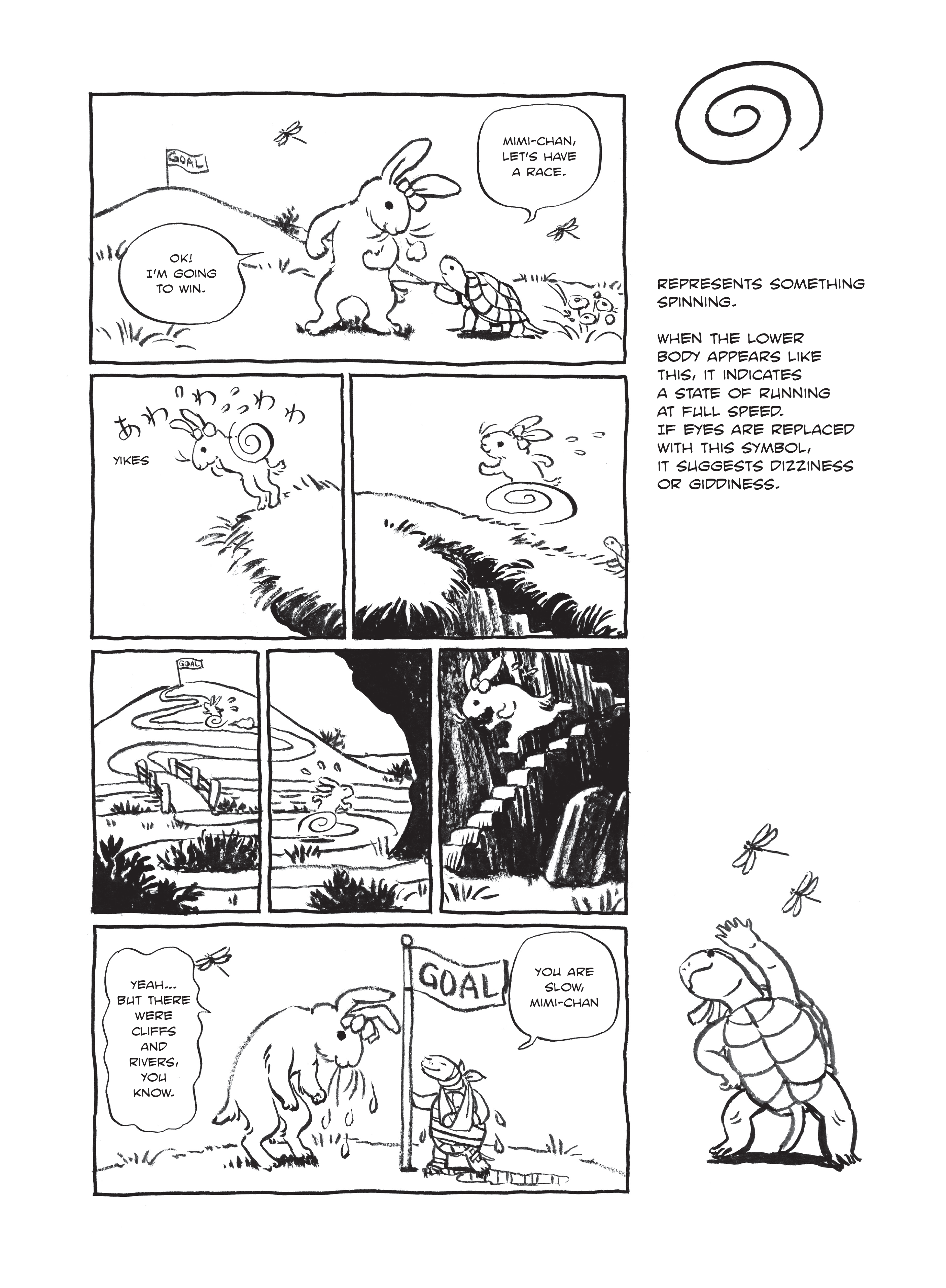 Manga images are supplemented by sound effects that include onomatopoeia and imagined sounds (kiseigo and kitaigo), which are important components of the Japanese language. These sounds are drawn onto the manga page composition, enhancing their effect by making them an integral part of the image rather than resting the words on top of the image or in a bubble.

Blue Giant Supreme, a compelling manga created by Ishizuka Shinichi tells the tale of a saxophonist, Miyamoto Dai who travels to Germany to pursue his dream of becoming one of the world’s best Jazz Saxophone players. He helps to form an international band and the manga takes us into the tour bus, seedy hotels and clubs. The music scenes show manga at its best – the reader can almost hear and feel the sounds played in their heads through the vertical, tightly drawn lines and sound effect symbol (in katakana, a Japanese phonetic system) reading ‘baaaaaaa’. 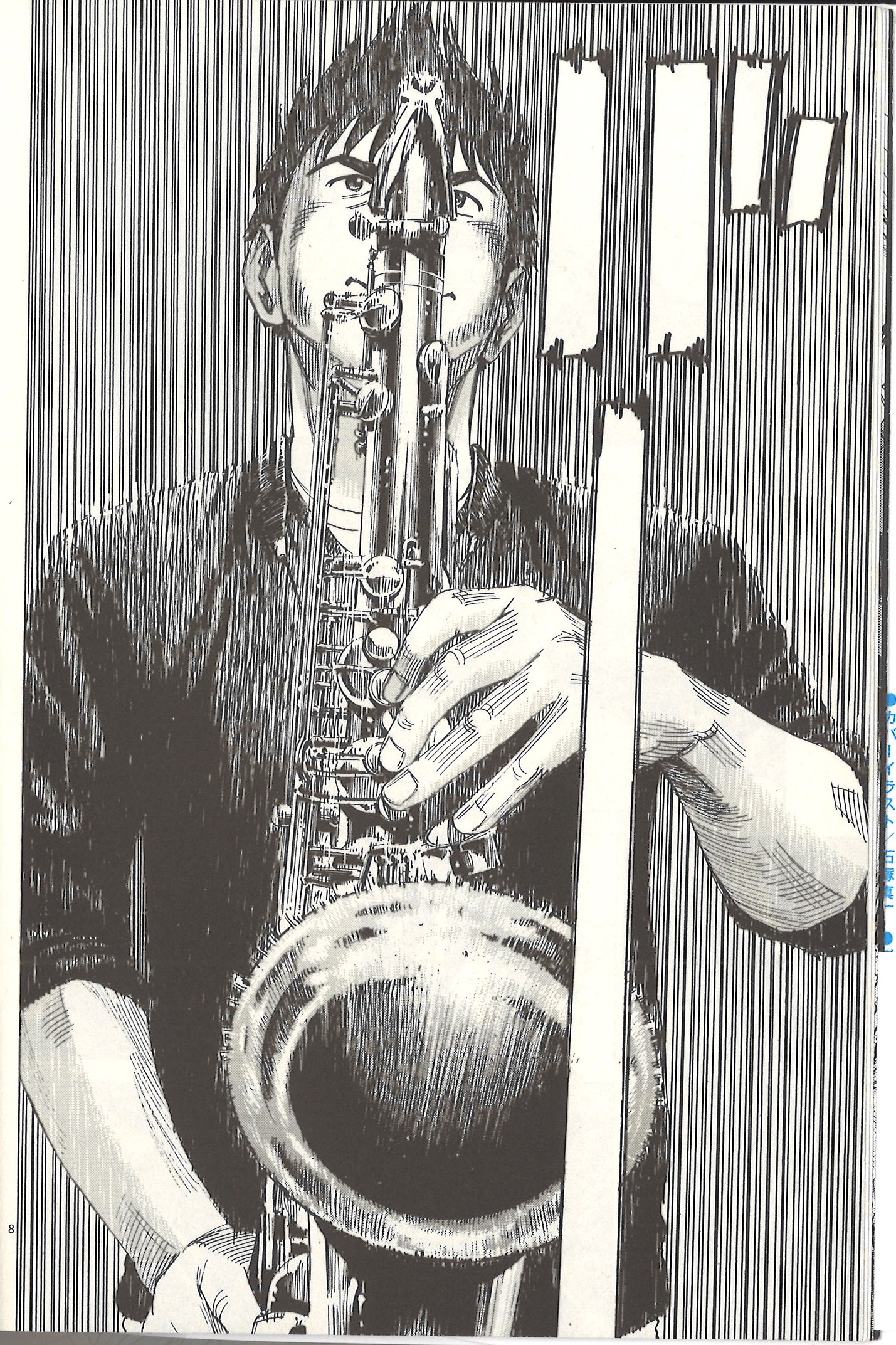 How is manga produced?

Many large publishers in Japan derive a significant portion of their profits from the sale of manga. It is big business: the turnover of the domestic manga industry alone in 2016 was approximately £3 billion. Four of the top publishers who also control a large share of the manga market are Kôdansha, Hakusensha, Shôgakukan and Shûeisha. They are constantly competing with each other, publishing rival magazines and trying to keep popular manga artists exclusively in their stables. New initiatives tend to be closely followed and imitated. Editors in each publishing house play key roles in producing the manga. They work closely with the artists and often help with content as well as managing production schedules, overall formatting and conducting basic research for the artist on the theme or images depicted. Uniquely, this exhibition examines this important, hitherto hidden, aspect of the manga industry by bringing a focus on the editorial process, rights and distribution.

One of the most seasoned stars still creating compelling manga is the legendary Chiba Tetsuya (b. 1939). Known for his sports manga, Chiba has drawn in many different styles, including shôjo or girl’s style and most recently a manga diary of his lifelong love affair with manga, included in the exhibition. One of his famous manga, Tomorrow’s Joe, is about a plucky boxer called Yabuki Joe. This manga caught the imagination of the nation when it was created with Takamori Asao in 1968-1973. Tellingly, it is still widely read and continues to strike a chord with its readers today, some 50 years on! Despite the many sports manga Chiba has created, he confided that he had never had the chance to draw a manga based on rugby. However, inspired by Japan’s Brave Blossoms’ win over the South African Springboks in 2016, Chiba started watching rugby and created this compelling bespoke work just for the British Museum, to celebrate the Rugby World Cup 2019 in Japan. 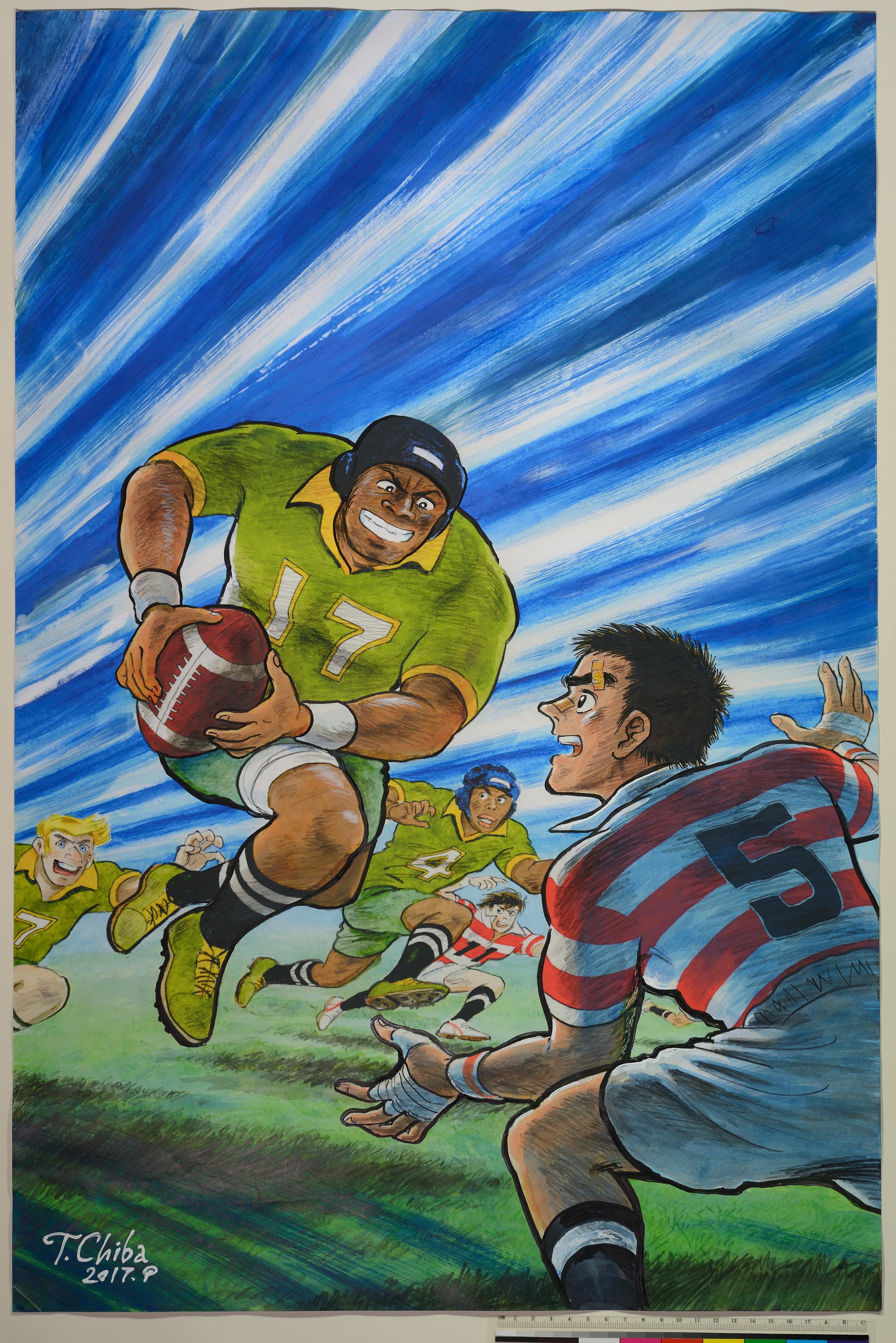 Hagio Moto’s manga is not only pioneering in exploring the medium of shôjo (manga created mostly for a female audience), she also is a master of introducing emotional depth and sophistication into her storylines. Among her manga classics is the Poe Clan series that has continued to thrill for over 40 years. The story revolves around a secret family of vampanellas (vampires) in 18th to 20th  century Europe, chronicling the evolving story of Edgar Portsnell and Allan Twilight with beautifully crafted images that bring you into their hidden and dangerous reality. Testifying to this manga’s power of attraction and much to Hagio’s fans’ delight, in 2018 Hagio was honoured with a rare Tarazuka Grand Theatre production of this work. Another of her magisterial works is Willow Tree and the full story will be displayed in the exhibition. We see in this image the heroine under the willow tree silently keeping perennial vigil over her son as he grows up over the years. With few words Hagio Moto’s mastery can bring us to tears. 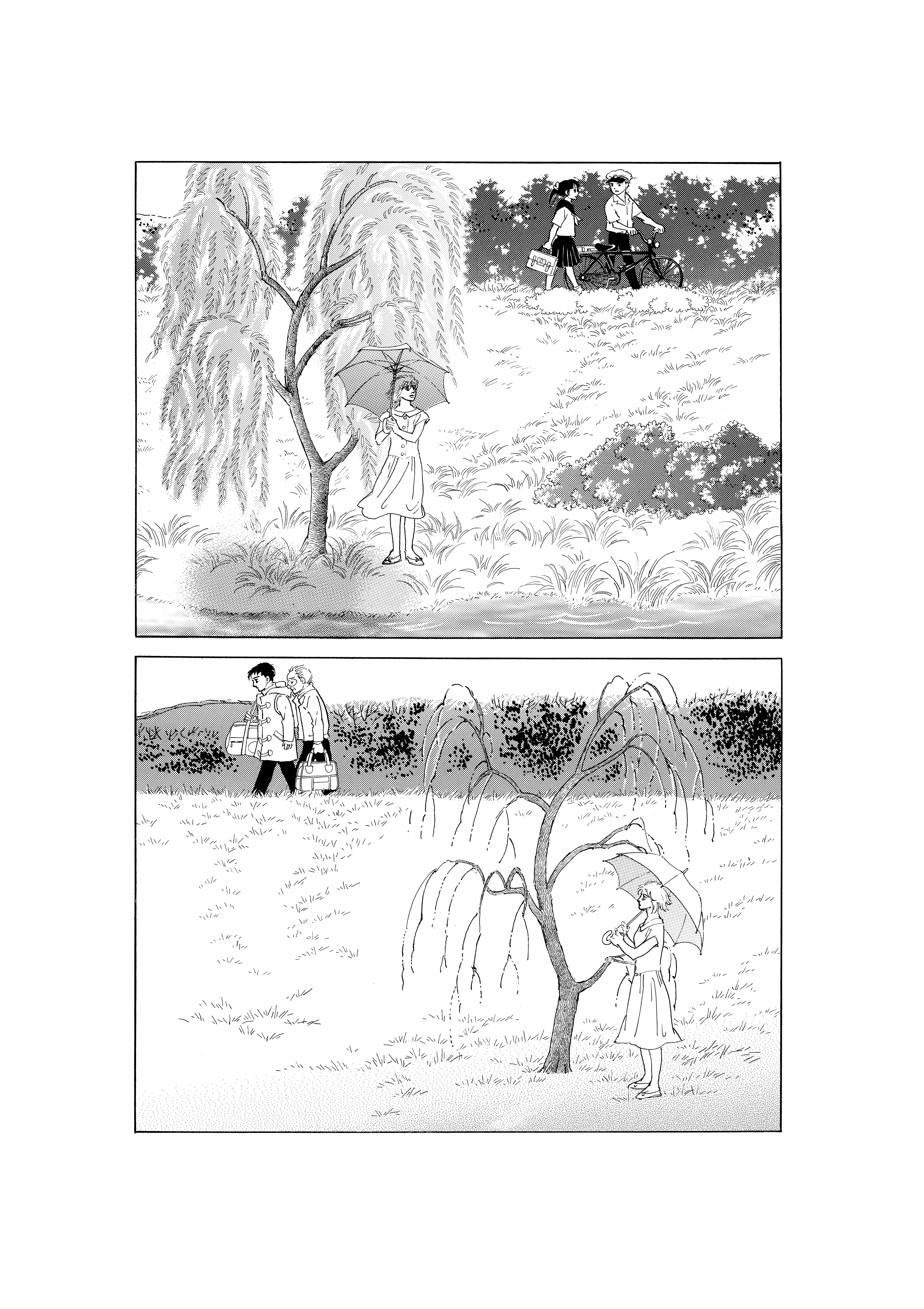 Only Nakamura Hikaru (b. 1984) could have created a manga that centres on the theme of Buddha and Jesus taking a gap year in Tachikawa, Tokyo. The series started off as a short run gag manga in the magazine Morning 2 in 2006, but is still going strong and gaining more followers with each tankôbon release, currently at volume 15. Nakamura kindly donated to the British Museum this cover artwork for volume 10. Here Buddha is learning how to draw manga, a newly found passion of his. It is early morning, they have stayed up all night and Buddha is unwavering but Jesus has fallen asleep, G-pen still in hand. What Nakamura has managed to do with this manga is to entertain, stimulate and keep us addicted to this wonderful friendship that never fails to make you see life around you slightly differently as a result. 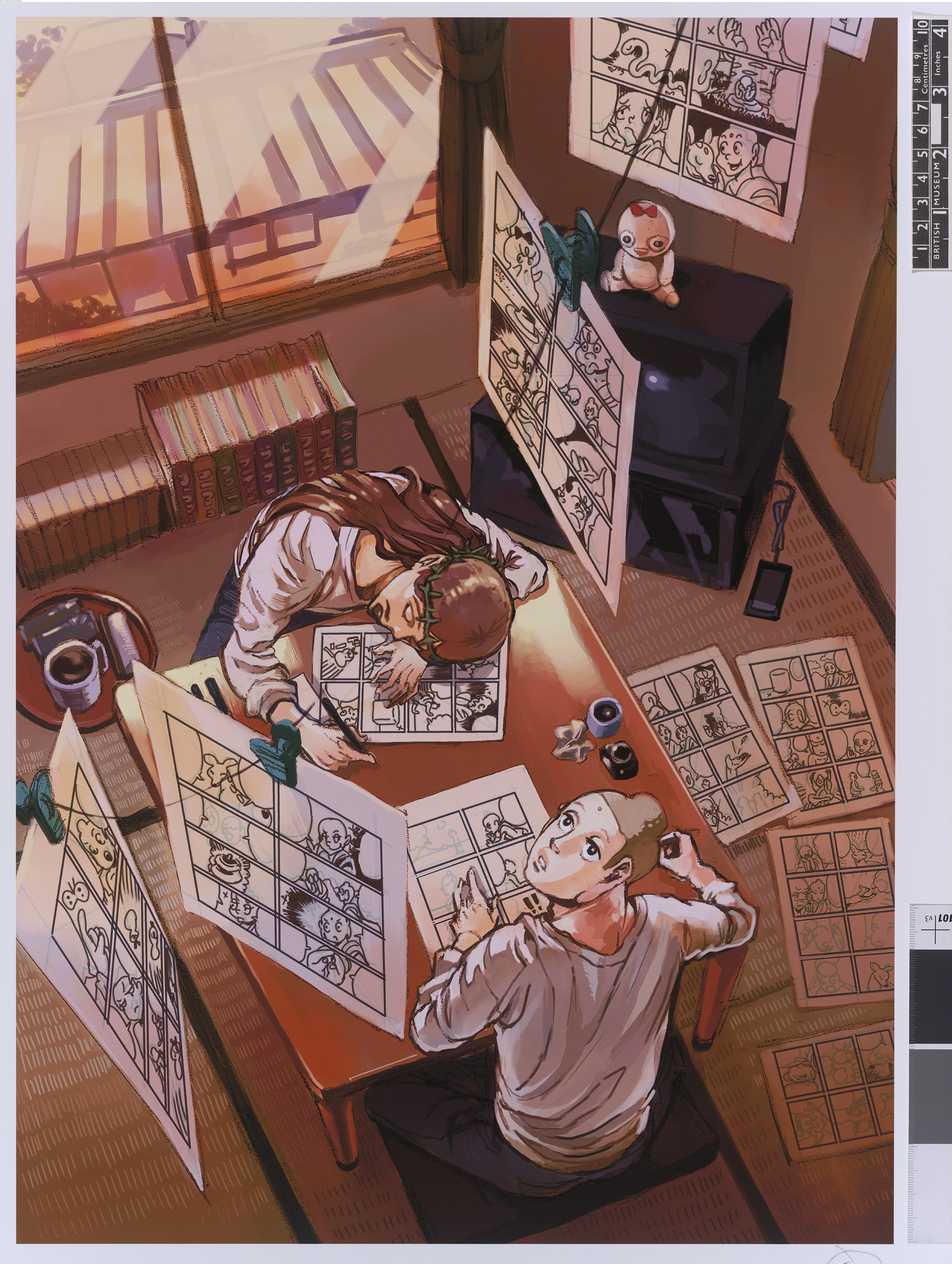 What is apparent in this exhibition is that manga absorbs and is absorbing, from kittens to nuclear fallout to Jesus and Buddha and beyond. From romance to adventure to life lessons, manga compels you to see your world differently – and can also be just good plain fun. Come and experience it yourself this summer and become fluent in manga with a single visit.