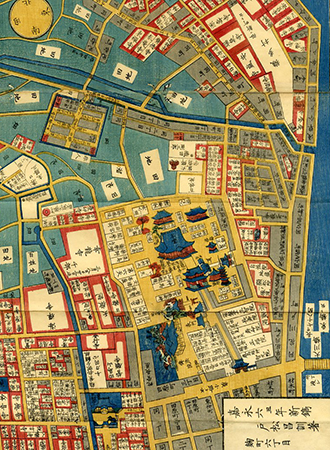 During the Edo period (1615-1868), some 64% of Edo city (present day central Tokyo) was occupied by mansions and residences of daimyō feudal lords, hatamoto samurai and gokenin vassals serving the Tokugawa shogun (Masai, 1975). These dwellings were typically shielded from public view with tall boundary walls. With no name plate on house number or street signs to go by, visitors experienced tremendous difficulty in finding the right house. The western side of the Edo Castle was said to be especially challenging as the first Tokugawa shogun, Ieyasu, deliberately positioned the obscure residences of his samurai and other security forces, who were collectively called ōban gumi, in the area to strengthen the castle’s security. This area came to be known as Banchō and was notorious for its confusing and difficult layout.

Close to and sandwiched between Banchō and the daimyō residential area of Nagata-chō is an area called Kōjimachi. Here, a man by the name of Ōmiya Gohei ran a household goods shop called Kingodō. It is said that samurai would often drop in to his shop to ask for directions, which he in return obliged and soon saw a business opportunity in producing an area map of Banchō to help his lost visitors navigate the neighbourhood. In 1846, they began selling, amongst other knickknacks, area map or kirie-zu of Banchō. The map provided an aerial view of daimyo and elite hatamoto servicemen’s mansions plotted along paths as boxy shapes with the names of the head of the household inscribed. Made to be foldable and portable, the maps were a handy navigation tool that paid a particular attention to the accuracy of building arrangements rather than topographic precision (Ōishi, 1992). These maps became widely known as the Kingodō Edo kirie maps. Their popularity grew to cover additional areas that by 1852 over 30 areas were covered, which included almost all of the Edo city neighbourhoods (Hamada, 1974).

Seeing the success of Kingodō’s street maps, a neighbouring print seller called Owariya in Kōjimachi began selling their own maps in 1849. In order to beat off competition from Kingodō, Owariya used simple visual techniques such as colour coding areas to identify and distinguish land uses and included illustrations of famous sites such as important temples and shrines to make their maps more visually striking. For instance, red is used to suggest temples and shrines and yellow for roads and bridges (as do Kingodō’s maps). Grey indicated townsmen’s living quarters. Blue referred to sea, rivers, moats, ponds and other sources of water (again, in line with Kingodō’s maps). Green is reserved for embankments, horse paddocks and agricultural lands. The houses of daimyo are shown without infilled colour, but instead, had names and family crests of the head of the household inscribed. In addition, ■ boxes indicate nakayashiki or second mansion belonging to daimyo and elite vassals, and ● dots point to shimoyashiki or suburban residences of daimyo and other high ranking servicemen (see note 1).

The colourful and illustrated Owariya maps were visually rich and seemed to be in higher demand than Kingodō’s maps, especially as gifts by warriors who were stationed in the city and about to return to their home countries. The number of areas covered by the Owariya maps, however, were less than their competitor’s range. By 1854, Owariya maps covered 25 areas (Hamada, 1974). By 1856 this figure had increased to 28 areas (Iwasaki Bijutsu). Nonetheless, Owariya appeared to lag behind as Kingodō already produced more than 30 area maps by 1852. By 1864, Owariya closed this gap by adding four more areas to create a 32 area set of the city (see note 2)(Shōbunsha). 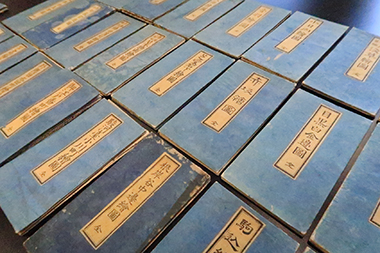 Unlike conventional maps we see today, the woodblock maps did not use cardinal points to configure the map’s layout orientation. That is, North did not necessarily come at the top of the map. In fact, Edo Castle often served as the orientation point. Areas along the Edo Castle’s outer mote, for example, were mapped with the castle to appear at the top of the map whether the building itself is included or not.

Also interesting is the position and direction of the text, which at first glance seem fairly random. However, there seems to be a general pattern to this assortment of character placements as noted below. (Yanaike, 2005)

1. Names of daimyo residences, temples and shrines are written in the direction to indicate the entrance of the premises. This is done by placing the first character at the entrance side of the area and the rest of the characters to flow toward the interior of the compound.
2. Townspeople’s living quarters are noted by the area’s name, rather than the specific resident’s name. The text direction is positioned to point towards the Edo Castle. The top character points to the castle, though it should be noted that the direction is not on a bee-line path, but pointed to suggest the quickest route to the castle.
3. Names of hills are written to correspond to the hill’s elevation. The top character points towards the top of the hill and the last towards the bottom (there are two area maps, however, where the text orientation differs from the topographic realities).
4. When the direction of the water flow is constant, names of waterways are shown with the first character pointing towards upstream and the last towards downstream.

The maps are not to scale and are instead based on approximation using the human eye. Some elements are exaggerated (Tawara and Iida, 1984). For example, images of famous temples and shrines are bigger than their actual sizes and reflect the way we encounter and perceive these grand structures. In fact, many preferred this more human experience and interpretation of topographic details. In 1852, Hiranoya produced a geographically accurate map, however, the popularity of Kingodō and Owariya maps continued to stay strong and forced Hiranoya to abort its effort after making just three area maps. (Yanaike, 2005)

Both Kingodō and Owariya maps required frequent updates as occupants of registered addresses often changed, especially in areas heavily populated by officials and other high-ranking warriors. It is said that there are over 170 editions of Kingodō and Owariya maps and possibly even more if versions with minute detail differences were also to be included in the count (Tawara and Iida, 1984). The fierce competition between Kingodō and Owariya continued until Kingodō stopped issuing revised maps in 1856, ten years after the publishing of their first map. Owariya in comparison continued to enhance their maps until the early Meiji period (1868-1912) (Ibid). A number of different editions survive to this day and provide us with a glimpse into the rapid transformation of Edo city from the Edo period to Meiji era. (Keio Gijuku Toshokan)

The Lisa Sainsbury Library was fortunate to acquire a collection of 28 area maps printed by Owariya through the generosity of Sir Hugh and Lady Cortazzi in late 2017. As aforementioned, Owariya maps were revised on a number of occasions and it is unknown exactly how many different editions were produced. Many exist today in different institutions and collections. While this may reduce the rarity value of the maps, the copious extant copies allow us to compare the different editions and utilise them as an important archival material. As a recent acquisition, these maps in the Lisa Sainsbury Library have not yet been digitised. Hopefully the digitisation will take place in the near future so that the maps can be accessed on-line by our readers soon.

Note 1: Kamiyashiki or literally the ‘upper mansion’ is the official residence of daimyo and other high ranking servicemen. Nakayashiki or the ‘middle mansion’ is the residence reserved for family members such as the retired head of household and children including the family heir. Shimoyashiki or ‘lower mansion’ is usually situated in the outskirts and used for retreats or as shelter in the case of emergencies such as earthquakes and fires. (Oikawa, 2007)