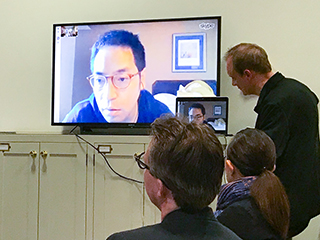 Now that the clocks have moved forward to summer time and spring blooms are out in force, it feels slightly anachronistic to reflect on our activities since the start of the year.

That said, the year kicked off in good form. Our popular Third Thursday Lecture series started with Sainsbury Institute’s Dr Simon Kaner giving the January lecture on ‘Perceptions of the arrival of beliefs’. In his talk he gave us a unique glimpse into the different ways the ‘arrival’ of Buddhism in Japan in the mid 6th century AD has been seen over time by a variety of observers, artists and other specialists.

Buddhism not only had an impact on the nation’s belief system, but certainly in Japan on its visual language as well. From the Esoteric Buddhist Mandalas to bokuseki Zen calligraphy and elaborate temple buildings, Buddhism had a profound impact on art, architecture, literature and more. Its enduring appeal is still palpable today, albeit some in a more secular context. In recent years, for example, the monumental mural work of The 500 Arahats by the acclaimed artist Murakami Takashi made big headlines. In the comic realm, Hikaru Nakamura explored a spiritual turn in her humorous Saint Oniisan manga story where the daily trials and tribulations of Jesus and Buddha’s apartment sharing life is captured. Buddhism in both religious and vernacular contexts continues to act as a cultural anchor for contemporary visual production in Japan.

The different strands of the evolution of religious beliefs will be explored over the next couple of years by Simon, who is currently developing a new exhibition project to be held at the Sainsbury Centre for Visual Arts at the University of East Anglia in 2020. The exhibition will compare the appearance of Buddhism in Japan and the adoption of Christianity in north-western Europe – the arrival of world religions at the extremities of the Silk Roads. 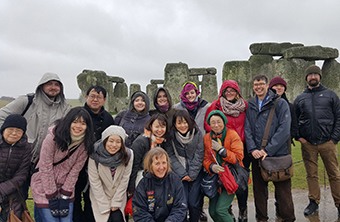 Meanwhile, the Institute welcomed the arrival of a different kind: ten undergraduate students from the UK and Japan. Now in its third year, the Sainsbury Institute ran the two-week Winter Programme with the University of Tokyo.

This year, the students experienced the wonders of many different British heritage sites. These included Happisburgh, a site where fossilised hominid footprints were discovered back in 2013. The footprints are thought to be the oldest outside of Africa and dates to the Ice Age some 800,000 years ago. Unfortunately for the students and other visitors, the footprints have since been destroyed by the tide just two weeks after their discovery. Unperturbed, the group then travelled to the flint mine at Grimes Graves, Sainsbury Institute in Norwich, and a number of museums in London including the British Museum. They also experienced the beauty of Roman baths in Bath as well as the glory of Stonehenge and the British weather. A trip worth a thousand memories!

Moving on from the theme of ancient heritage, discussions on politics and censorship dominated our research projects in February and March. In February, Dr Shioya Jun gave a fascinating Third Thursday Lecture on the history of censorship in Japan, particularly around the use of Meiji Emperor’s portraits in the late 19th and early 20th centuries. Traditionally, the Japanese upheld the belief that the Emperor and Empress are sacred direct descendants of the sun goddess Amaterasu Omikami. Depicting the face of Imperial family members, therefore and especially of the Emperor, was historically considered a major taboo. However, as Japan began to modernise and expand since the Meiji Restoration in 1868, the need for a visual identity to galvanise modern state building efforts arose. This led to the mass production and circulation of Emperor Meiji’s portraits.

Dr Shioya, who is the Head of Modern and Contemporary Art Section at the Tokyo National Research Institute for Cultural Properties (Tobunken) explained that there were legal restrictions put in place to control the ways in which the portraits would be used. Any caricatures satirising the Emperor were subject to anti-defamation law, which if convicted involved imprisonment and heavy fines. He also discussed the public’s fascination with the novelty of his portraits and how some artists fell foul from the authority despite some the images appearing harmless. Particularly fascinating were examples of political cartoons and caricatures published in foreign media that presented the Emperor in not a very favourable light. Dr Shioya confirmed that such images if printed in Japan would most certainly be penalised under the anti-defamation law. 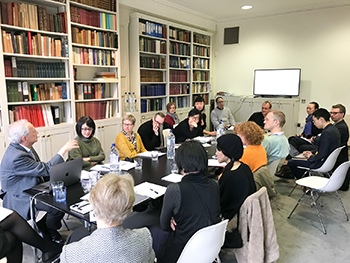 In March, Professor Adrian Favell explored the notion of censorship and its ramification in more recent contemporary art context. In his Third Thursday Lecture, “After the Tsunami: Japanese Contemporary Art since 2011″, Adrian remarked that the catastrophic event in 2011 irrefutably changed the creative landscape of Japan. From the largely popular culture inspired works seen since the 1990s, such as those by Murakami Takashi, Nara Yoshitomo and Aida Makoto, the creative outputs since the tsunami in 2011, especially by younger generation of artists, have taken a more community based, socially engaged and politically critical stance.

Adrian highlighted the different aspects of censorship that currently affect artists, academics and activists who critically challenge dominant social and political views. In the closed discussion workshop held the following day on 16 March, the relationship between art, politics and censorship—especially on works that focus on the Triple Earthquake disasters of March 2011—were debated intensively by curators, artists and academics. The workshop teased out how the rule of censorship operated. It can be explicit, for example by way of police intervention or political pressures, or by manipulating financial support. It can also be tacit or even self-imposed, where self-censorship (or in one artist’s words, “self-surveillance”) may control the outcome.

The main concern, however, is the limited platform to publicly debate and flesh out these issues in Japan. With Japan set to host the 2020 Olympic games, the government is taking extra efforts to manage the country’s international brand appeal. This includes encouraging government funded projects to omit the use of socially sensitive words such as “tsunami”, “disaster” and “radiation”. Advocates of hardline policies took a radical step to introduce the controversial special state secrets bill that the government passed in 2014. This law allows both public officials and private citizens who divulged “special state secrets” to be prosecuted with a prison sentence of up to 10 years or a heavy fine if convicted. It appears that the image of Japan as a free democratic, free speaking nation is more of a high gloss veneer to cover up and obscure the unnerving realities. Shocking? Yes, but somehow not that surprising. Especially in an age where we’ve become accustomed to “fake news” and post-normal political propaganda, anything is game. 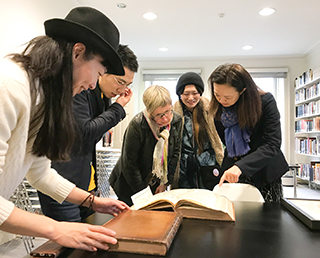 On a more optimistic and upbeat note in closing, I’d like to leave you with the honest true news from the Institute. On 1 March, the Institute welcomed Dr Simon Kaner to fill the role of Executive Director left by Mami Mizutori following her appointment as Assistant Secretary General of the United Nations. Simon, who has been with the Institute for over 15 years, will lead the research activities of the Institute beyond his field of Japanese archaeology. Supported by the Institute’s academic colleagues including Professor Toshio Watanabe, Professor Nicole Coolidge Rousmaniere, Dr Jennifer Coates (from April) and Dr Eugenia Bogdanova-Kummer (from July), Simon will play a greater role in shaping the Institute’s other key research areas, namely the Art and Cultural Resources research and Contemporary Visual Media research. I look forward to sharing further project details in the coming issues.