Buitenzorg Villa then and now: Japanese art at the Ferenc Hopp Museum of Asiatic Arts, Budapest 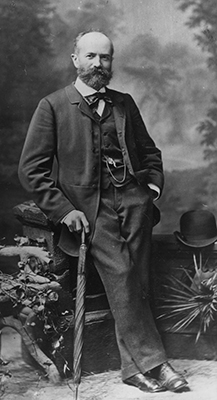 In 1858, a Japanese envoy visited the United States for the first time. Ferenc Hopp (1833-1919), a 25 years old Budapest resident with Moravian roots, was among the onlookers and received a Japanese coin from a member of the Japanese delegation. Japanese yen as we know it today did not yet exist, and it wasn’t until 1869 that the Austro-Hungarian Empire established a formal diplomatic relationship with Japan. Another decade passed until Ferenc Hopp, a wealthy dealer of opticial goods and cameras could set sail for his first globetrotting tour. He reached Yokohama in 1883. Having fallen in love with Asia through the two lenses of his stereo camera, he toured around the world at various times and returned to Japan twice,once in 1903 and again in 1914. His collection of around 5000 pieces of Asian art was exhibited in his villa with an oriental garden at Andrássy Road, an affluent main street in Budapest. The pieces were published in various illustrated news and magazines and the so-called Buitenzorg Villa was busy with visiting friends and art enthusiasts. Since he has never studied oriental languages and art he did not have a systematic collecting activity. Instead, he picked good quality pieces available in the market with his reliable eyes as his companion. Indian miniatures and jewelry, Chinese snuff-bottles and vessels made of jade and enamel, and Japanese lacquer objects, ivory carvings and sword fittings were among his most beloved objects.

In his will, Ferenc Hopp stated his wish to donate his house, garden, and collection of around 4000 pieces of Oriental art to the Hungarian State on the condition that they will operate the address as a state museum. The museum was officially founded in 1919 and the first exhibition was opened in 1923. At the time of its foundation, the Ferenc Hopp Museum was the only museum in Hungary which specialized exclusively in Asian art and it retains that position even today. Through donations, purchases, and the transfer of Oriental material from other museums, the collection has grown since its foundation. Today it consists of some 30,000 artefacts originating from China, Japan, India, South East Asia, Nepal, Tibet, Mongolia, Korea, and the Near East. 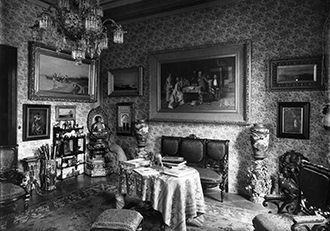 The parlor in Ferenc Hopp’s villa, 1914. Among the objects now in the
collection of the Hopp Museum, in the corner is the Japanese statue of the
Amida Buddha (inv. no. 6710). Glass plate negative. FHMAA Archive N 2095

The museum operates as an affiliation of the Museum of Fine Arts, Hungary. Its reference library specializes in Oriental art, and its documentation department conserves valuable photographic and documentary materials relating to Orientalism in Hungary, the history of collecting Asian art, Hungarian travelers’ journeys to Asia and the museum’s past exhibitions. Both are situated on the first floor of the villa, while the second floor is dedicated to temporary exhibitions that seek to present the entirety of our Asian collection. Each exhibition focuses on a different theme, period, and geographical area. Due to limited space at the Hopp-villa, the museum does not have a permanent exhibition.

Interior of the museum during the exhibition In Search of Prince Genji – Japan in Words and Images. Photo: Csanád Szesztay, 2016.

Japanese art at the Hopp Museum

The Japanese art collection with approximately 8000 items is one of the biggest collections within the institution. A major part of it is datable to the Edo period. The first pieces were collected by Ferenc Hopp, founder of the museum. He was particularly impressed by the multitude of high quality decorative arts, which were available on the spot and via international orders. By the end of his life he had amassed some 1800 Japanese artefacts.

The oldest Japanese art object in the collection is a hollow dry-lacquer statue of a seated bodhisattva datable to the Nara period. A significant part of the collection was purchased by Count Péter Vay bishop and protonotary under the Pope in Rome, who sojourned to Japan during his missionary activities. The Hungarian state entrusted him to purchase Japanese objects for the Museum of Fine Arts, and the collection of around 2300 pieces, including approximately 300 paintings, 1500 woodblock prints, ten Buddhist sculptures, and some 700 examples of metalwork, lacquerware, netsuke, were bought and introduced to the public in 1908.

The majority of the woodblock print collection is represented by the masters of ukiyo-e, mainly from the Torii, Katsukawa, Utamaro and Utagawa schools, but the collection of approximately 200 woodblock printed books from the Edo period, and surimono prints consisting of another 100 pieces are also notable. Sparrow and bamboo, the earliest painting of the collection, is an ink painting by Shūtoku in kakemono hanging scroll format from the 16th century. Another important piece, Shōki, is an ink painting signed by the eighty-eight-year-old Hokusai. The classical style Yamato-e painting is represented by a Genji Monogatari album in the manner of Sumiyoshi Gukei, from the end of the 18th century. 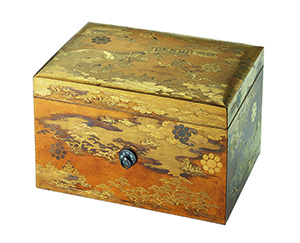 Traditional applied art genres of Japanese artistry are also represented in the collection. Objects in the approximately 1000-piece collection of lacquerware are mostly datable to the end of the Edo period and early Meiji period, containing incense boxes, inro, boxes for writing utensils, combs, hairpins, and toys. Of special value is the collection of approximately 500 netsuke, representative both in terms of material, shape and iconography, and schools. A significant part of the ceramics collection consists of Arita ware with many pieces dating from the 17th century, but the high-quality Satsuma collection also deserves attention.

Recent donations and acquisitions are the obi sash sample collection donated by Mashima Reiko in 2011. Others include Japan-inspired contemporary jewelry and photographs by Hungarian artists, and a collection of watercolours by George Komor, Hungarian art dealer who documented the reconstruction of Yokohama after the Great Kanto Earthquake through a series of 33 watercolour paintings in 1926.

2019 will be a busy Japan year as the Hopp Museum is planning to celebrate a double anniversary through its exhibitions. The first is the One hundred years of the Ferenc Hopp Museum of Asiatic Arts exhibition, which will open in April 2019. The exhibition celebrates the centenary of museum’s foundation and reexamine its 100-year history from the viewpoints of collecting tendencies, curatorial concepts, conservation, and communication. The exhibition will reflect, among other themes, on the real or imagined cousinhood between the people of Asia and Hungary and on the friendship between them during the Soviet era; on art confiscation as a mean of collection enlargement; and on Buddhist art as a common denominator of all cultures represented in the collection. 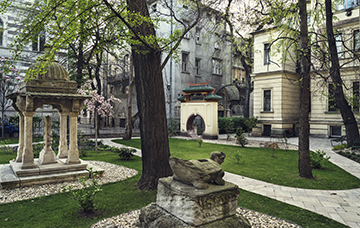 Recent photo of the garden of the museum with statues and constructions
collected by Hopp during his journeys in Asia. Photo: Csanád Szesztay, 2016.

The second exhibition, Japonisme in the Austro-Hungarian Empire will open in October 2019. Representatives of the Austro-Hungarian Empire and the Empire of Japan signed the treaty of amity and commerce in 1869, which is arguably the most important outcome of the first expedition of the Austro-Hungarian Monarchy to Japan. This opened up diplomatic relations between the two empires which allowed for international dialogue on politics and secured trade, and cultural exchanges between the two countries. Although the Monarchy ceased in 1918 and the Austro-Hungarian Empire dissolved into many sovereign countries, the Central and Eastern European regions still have much in common based on the shared threads of cultural history. These include today’s Austria, Hungary, Czech Republic, Slovakia, Poland, Romania, Slovenia, Croatia, and Italy to name a few. In history, the succeeding states of the ex-Habsburg Empire were instrumental in igniting interest in and diffusion of knowledge and appreciation of Japanese culture in the region. The aim of the exhibition is to examine the influence of Japonisme in the entire area once held by the Monarchy by concentrating not on its territorial differences, but rather on its similarities. This will be done through creating a linear narrative thread linked to “focal points” or points that were shared amongst most of the geographical areas within the Austro-Hungarian Empire.

The Frenec Hopp Museum of Asiatic Arts is open to the public from 10am to 6pm on Tuesdays through to Sundays (closed on Mondays and key holiday times). We look forward to seeing you at the Museum. For more information, please visit the Museum website. 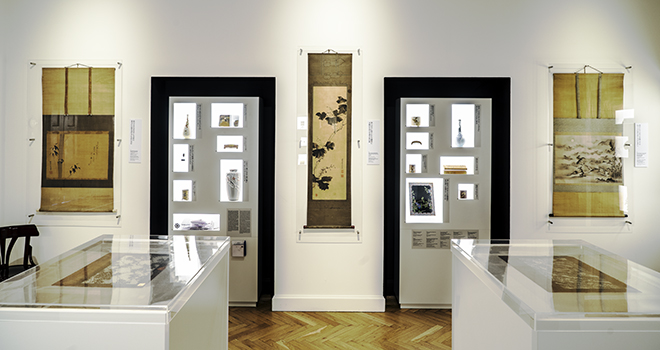 4. Interior of the museum during the exhibition In Search of Prince Genji – Japan in Words and Images. Photo: Csanád Szesztay, 2016. 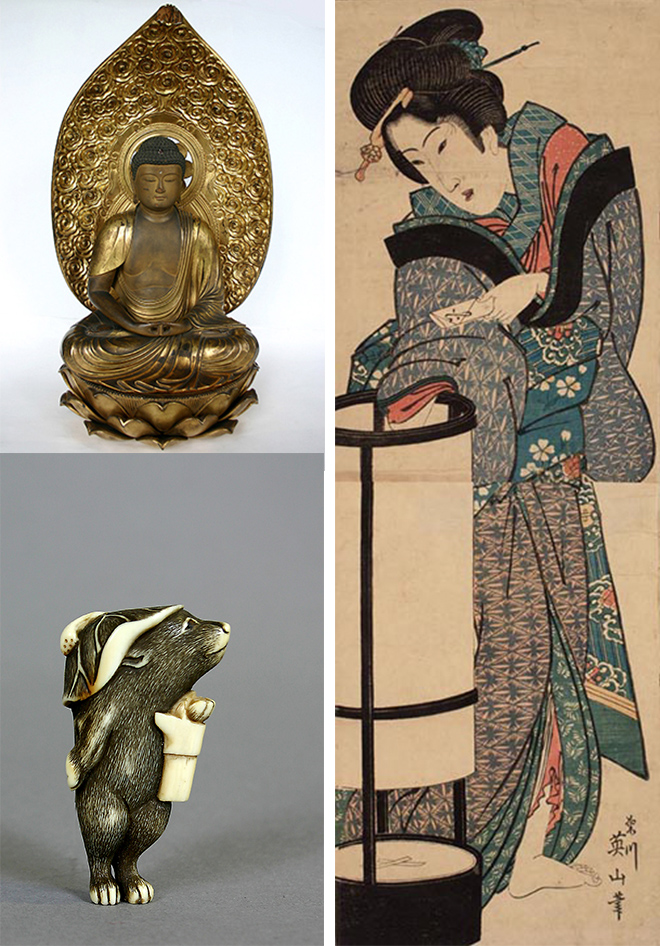