Japanese art exhibitions to catch during spring to summer

With winter finally behind us, spring has sprung in Norwich. Our institute garden is now teeming with colours: crocuses and daffodils are enjoying the sunshine while trees and bushes are budding green again. On the subject of feast for the eye, there are some wonderful exhibitions on show during spring and in this edition, I’d like to introduce four fascinating exhibitions—two in New York, one in the Netherlands and one in the UK. I hope some of you will have a chance to visit them. 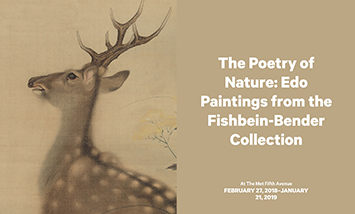 The Poetry of Nature: Edo Paintings from the Fishbein-Bender Collection
The Metropolitan Museum of Art, New York
Now until 21 January 2019

The Edo period (1615-1868) saw Japanese art flourish in new directions. It was a time when woodblock prints in particular reached new heights with technological advancements and increase in consumer demand. But what about paintings? The Met’s new exhibition, The Poetry of Nature: Edo Paintings from the Fishbein-Bender Collection, showcases the breadth of different painting schools and styles that had a major impact on the artistic development during the Edo period and beyond. Works by the famous Kano school and Rinpa school painters are presented together with lavish, gold embellished Japanese yamato-e style paintings and the more austere Chinese style ink painting. Works by literati painters, Zen priests and secular artists including both professional painters to so-called amateurs are shown.

The exhibition features over 40 paintings displayed alongside Japanese contemporary ceramics which complement the paintings. Dr John T. Carpenter, Mary Griggs Burke Curator of Japanese Art at the Met, who co-curated the exhibition and is an expert on calligraphy, has provided excellent translations of the textual materials found in these paintings. He notes that Japanese paintings often involved a complex interplay of text and images. They could not be read independently and separately from each other. Instead, the meanings are often interwoven between the two and in many cases allude to other historical references. The patient viewer, therefore, would have to exercise their knowledge and imagination to fully appreciate the precise meaning of an image. Otherwise, for example, it would be virtually impossible to recognise that the poem accompanying a hanging scroll of a beautiful courtesan adjusting her hairpins alludes to the Buddha.

The exhibition is accompanied by a catalogue by the exhibition curators John T. Carpenter and Midori Oka, associate director of the Mary Griggs Burke Center for Japanese Art at Columbia University. For those who can’t quite reach New York in time, there is a virtual option. All the exhibited works are available for browsing through the Met’s website. For those lucky to make the trip, I am sure the website will offer a nice preview to whet the appetite before the visit. 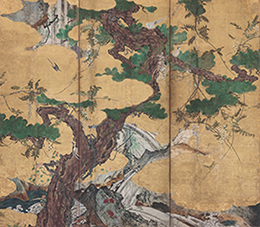 A Giant Leap: The Transformation of Hasegawa Tōhaku
Japan Society, New York
Now until 6th May 2018

A Giant Leap: The Transformation of Hasegawa Tōhaku is the first major exhibition dedicated to the work by Hasegawa Tōhaku (1539-1610) in the United States. This exhibition reflects Tōhaku’s glory during what is known as the Golden Age of Japanese art in the Momoyama period (1573-1615). The show includes works from private collections in New York and paintings designated as National Treasures and Important Cultural Properties in Japan. Hasegawa Tōhaku was an innovative painter who had a distinct and decorative painting style. Born as a chōnin (townsman) in Nanao, Noto Province (present day Ishikawa Prefecture), he moved to Kyoto in his early thirties where he developed his personal artistic style and aesthetics. He died in Edo in 1610 just two days after arriving to the capital. A prolific painter, he produced a significant number of paintings during his lifetime. These include Buddhist paintings produced mostly before he moved to Kyoto. Once settled in the imperial capital, he worked on flamboyant kimpeki-ga (blue-and-gold paintings) and monochrome ink paintings called suiboku-ga. He learnt kimpeki-ga techniques from the Kano school while working in the school’s studio, while he gained suiboku-ga painting method by observing examples in temples he came across during chanoyu (tea ceremony) attendance. A Giant Leap: The Transformation of Hasegawa Tōhaku uncovers Tohaku’s magnificent and awe-inspiring exhibition of his works. 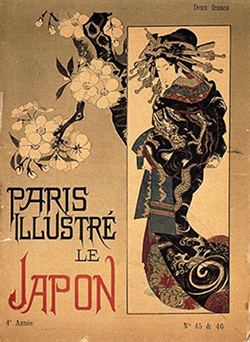 Van Gogh is arguably one of the most celebrated and beloved Western artists in many parts of the world with Japan not being an exception. He is known for drawing inspiration from his collection of Japanese woodblock prints (ukiyo-e prints) produced in the Edo period (1615-1868). He often referenced these prints in his paintings by copying and adapting elements from the Edo period examples.

Van Gogh and Japan exhibition demonstrates how Japanese woodcut prints influenced the Dutch artist and showcases around 60 of the artist’s paintings together with Japanese woodcut prints. Influenced by Impressionism during his stay in Paris, Van Gogh was also captivated by the Japomisme movement that swept through Paris and beyond largely in the 1880s. A painting featured in this exhibition, titled ‘Courtesan (after Eisen)’ is said to be his attempt at copying a woodblock print titled ‘Oiran (Courtesan)’ illustrated by an ukiyo-e artist Keisai Eisen (1791-1848). The latter appeared on the front cover of a magazine called Paris Illustre published in May 1886. This was a special feature issue on Japan, in which Hayashi Tadamasa, a prominent Japanese art dealer in Paris, introduced various aspects of Japan to the French speaking audience. These included topics ranging from history to culture, from climate to religions, and, without exception, Japanese art, which would have attracted many readers including Van Gogh at that time.

Van Gogh and Japan is a touring exhibition and has attracted many visitors already. Initially opened at the Hokkaido Museum of Modern Art, the exhibition travelled to the Tokyo Metropolitan Museum and finished its Japan tour at the National Museum of Modern Art in Kyoto. This tour will conclude in Amsterdam. 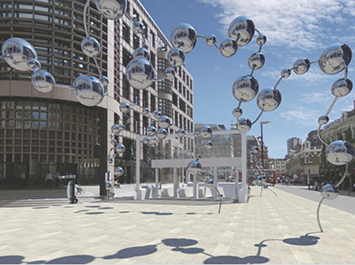 Yayoi Kusama. Her name is as ubiquitous as the millions of dots she has placed on her artworks. This energetic avant-garde artist, still active at the age of 89, seems unstoppable. Prolific and full of vitality, she seems dismissive of the idea of slowing down.

The recent big news is the announcement that she is named as one of nine artists to be commissioned by Crossrail to create major public art installations in London. The works will be unveiled in December 2018 to celebrate the opening of the new rail line, Elizabeth Line. The work proposed by Kusama will be her first permanent installation in the UK. It is not her iconic colourful pumpkin-shaped object with polka-dots, but instead, draws on her more recent theme of ‘infinity’ found most explicitly in her Infinity Mirror. The mirror and light based work translates her infamous polka-dots into an immersive, sensory experience. Yayoi Kusama’s sculptural concept for Crossrail, together with maquettes and works by other eight artists, is currently on show at the Whitechapel Gallery in London at the special exhibition entitled Art Capital: Art for the Elizabeth Line.

Kusama is no stranger on the exhibition circuit. She opened her own museum in Tokyo just less than 6 months ago. Exhibitions about Kusama are almost always taking place somewhere in the world. For example, she currently has a two-year touring exhibition entitled Yayoi Kusama: Infinity Mirrors in North America, which started at the Hirshhorn Museum and Sculpture Garden almost year ago and is currently on at the Art Gallery of Ontario. This exhibition will then conclude at the High Museum, Atlanta in February 2019.

Her public art for Crossrail will be installed at the new London Liverpool Street’s Elizabeth Line station at Broadgate. From next year onwards, if you are visiting Norwich from London Liverpool Street station, note that Yayoi Kusama’s installation will be a mere stop away and worth admiring before boarding the train to Norfolk.

All the exhibition details and publication information introduced here and more on what is happening in and outside Japanese arts and culture can be found on the comprehensive research database, developed by the Tokyo National Research Institute for Cultural Properties, known as Tobunken. As a research partner of Tobunken, the Sainsbury Institute contributes by providing resources to gather information and add data on Japanese art exhibitions taking place outside of Japan and publications in English.
The new feature has been added to the Tobunken Database recently. Exhibitions and film festivals taken place outside of Japan are now searchable by keyword.