Fellows and their Research

Amanda Kennell and Alice in… Japan? 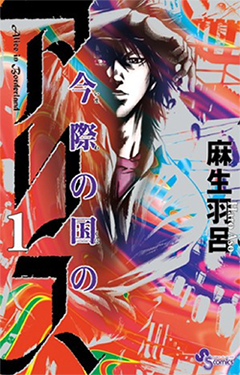 Today, we are surrounded by more media than humans have been at any other point in history. We wake up in the morning and put on the TV while we hop into our branded clothing and skim the paper before commuting via public transit systems full of advertisements while playing games on our smartphones. Then, we work with computers all day before returning home to stream a movie or read a book before bed. Despite leading heavily-mediated lives, we do not really understand the media environment that surrounds us, nor do we understand how we interact with these many media. My research attempts to unravel this tightly-wound knot of media by focusing on how stories move across media in Japan and how the media environment has changed over time. Obviously, that is an awfully complex subject, so I narrow it down by looking at one set of stories – Lewis Carroll’s Alice in Wonderland novels – and how those stories have been adapted in Japan over time to see what those many adaptations can tell us about Japan’s media, how they relate to each other, and how they have changed since Alice was first introduced to Japan.

Alice was first introduced to Japan through the pages of an 1899 translation by a young editor named Hasegawa Tenkei. Curiously, Hasegawa translated not Alice’s Adventures in Wonderland (1865) but its sequel, Through the Looking-Glass, and What Alice Found There (1871). Then again, this backwards introduction is perhaps fitting for the unlogical world of Alice. Since then, the Alice novels have been translated more than 425 times. In fact, it is impossible to say how many times the Japanese have translated Alice, because some amateurs have started translating Alice and posting their translations online to help themselves learn English. The ranks of Alice translators are quite diverse though, and include Mishima Yukio, an artistic provocateur and finalist for the Nobel Prize for Literature, as well as a joint translation by acclaimed short story author Akutagawa Ryūnosuke and playwright Kikuchi Kan. Akutagawa, Kikuchi and Mishima used the act of translating Alice, with its playful unlogic and made-up words, to stretch themselves artistically. Consequently, we can look at their translations to see modern Japanese literature in its protean form.

At some point, that protean literature must take shape and be presented to readers. Hasegawa’s initial translation, entitled Mirror World (kagami sekai) was serialized in a children’s magazine. Akutagawa and Kikuchi’s joint translation, Alice Story (Alice monogatari,1927) was published as one volume in a series of books for children. Other translations have been published for girls, boys, English-language learners and those adults with a special interest in foreign literature. Publishers clearly feel that Alice is of interest to everyone – young and old, male and female.

What happens to that unified audience when Alice moves beyond text? Over the years since 1899, Japan has produced Alice plays, films, comics, art, music, games, tea sets, clothing, themed cafés, stationery and much, much more. Some of these adaptations clearly play to a specific audience. For example, on a half-dozen trips to Diamond Dining’s Alice-themed restaurants, I never saw a party that consisted solely of men. Diamond’s target audience is clearly ladies who lunch and young mothers, with the occasional doting husband in tow. Yet, the unified audience of Alice translations still exists: when we look at the overall body of Alice adaptations, we can find works aimed at all ages and genders, as well as certain special interest groups. 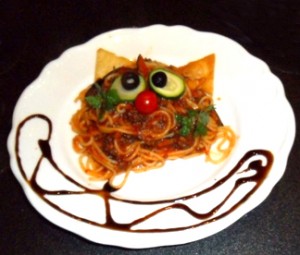 Cheshire Cat spaghetti at Diamond Dining’s Alice in Magical Land
restaurant in Japan. Note that as the diner eats the spaghetti,
the Cheshire Cat disappears, leaving only his smile behind.

For every restaurant focused on adult female diners, there is an Alice in Borderland (Imawa no kuni no Alice, 2016) comic aimed at boys or a special delivery for film buffs like renowned director Iwai Shunji’s Hana and Alice (Hana to Alice, 2004). The masses of Alice adaptations in Japan seem horribly diverse, but in fact they tie together the disparate media of contemporary life. Everyone may not see identical Alice works, but we all get the same basic story about an unlogical world and its wondrous denizens. The media that surround us could serve as a barrier between ourselves and other people, but ultimately the stories that get adapted over and over again within those media connect us to each other.

My research focuses on Japanese media culture, but the lessons we learn from it can be applied to our own lives as well. Lewis Carroll’s Alice in Wonderland novels are a vibrant part of British culture today. Whether one examines the Christmas display windows at department stores like Fortnum and Mason and Jarrold, tea sets by companies like Whittard and the Edinburgh Woolen Mill Company or the elite productions enacted at such venues as the Royal Opera House and the Rose Theatre, Alice serves as a form of social glue for today’s Britons much as it does for the Japanese.