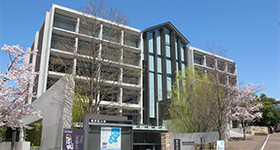 The Kokugakuin University Museum is nestled in the heart of the vibrant Shibuya district in central Tokyo. It is a university museum whose parent institution—Kokugakuin University—is held in great esteem, with a long history of patronage by the imperial family. Its history dates back to the 19th century when the University was initially established as the Office for Japanese Classics Research in 1882 to study Shinto beliefs. In 1946, shortly after the end of the Second World War, Kokugakuin became one of the earliest educational institutions in Japan to be granted the status of university by the Occupation administration (the GHQ) in order to continue research on imperial classics.

The origins of the Museum date back to two earlier institutions: The Museum of Archaeology founded in 1928 and the Shinto Museum founded in 1963. These two were later merged and formed the current Kokugakuin University Museum in 2013.

The Museum was founded with the goal of gathering and preserving cultural artifacts necessary for the study of Japanese culture. These artefacts which make up the ‘Kokugakuin Collection’ are considered to be the embodiment of the kokoro or ‘spiritual roots ’ which lie at the basis of all educational and academic activities conducted at Kokugakuin University. The Museum’s permanent exhibition includes exhibits that tell the history of the university, and other academic resource archives. There are also archaeological materials related to Japan and the surrounding regions. The exhibits aim to help visitors to deepen their understanding of both Shinto and Japanese culture in general.

The Museum also hosts special exhibitions, events, and educational activities to engage the public with the work undertaken at the University. 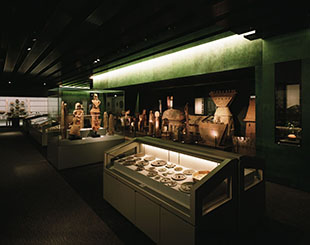 Exhibition space inside the museum

The main archaeology collection is made up of some 80,000 archaeological materials with nearly 3,000 objects on display at any time. Charting the prehistoric periods of Japanese culture, the collection can be largely divided into the Palaeolithic, Jomon, Yayoi, Kofun, and later periods including artefacts from neighbouring countries in East Asia and beyond.

Some of the most striking objects include the Jomon period (12,000BC-300BC) deep clay pot from the Iwanohara site in present day Niigata prefecture. The pot is characterized by four cockscomb protrusions, which resemble blazing flames, and saw-tooth type rims. Artefacts from the Yayoi period (300BC-300AD), marked by the introduction of bronze, include the famous crossed-bands pattern dōtaku (ancient bronze bell) (kesadasuki dōtaku) said to be from the Ohiwayama site in present day Shiga prefecture.

One of the most important objects in the entire collection is a stone headrest from the Kofun period (250-538AD), a period symbolised by the formation of a complex nation state with elaborate burial rituals. This headrest, excavated from the Anesaki Futagozuka Mounded Tomb in present day Chiba prefecture, is designated as an Important Cultural Property. Made from talc stone, the headrest was used to support the head of the interred body. The sides were sculpted in a ‘staircase’ fashion and covered with chokkomon motifs (designs composed of combined geometric and curved patterns). This kind of stone headrest is frequently found in burial mounds ranging from southern Ibaraki Prefecture through to the northwestern area of Chiba Prefecture, and commonly referred to as ‘Jōsō type’ stone headrests (Jōsō refers to certain areas of eastern Japan).

The Museum’s Shinto collection provides a glimpse into the lives of the Japanese people and the rituals they held for the kami, or gods. The exhibition space presents how festival rituals, or matsuri, were conducted at Shinto shrines (jinja) throughout Japan. The display allows us to understand that physical objects used at shrines were at the same time objects of faith and connected to the spirit (kokoro) of Japanese religious life.

The third component of the collection, named the Kokugakuin Archives, focuses on the study of ‘Kokugaku’ or ‘National Learning’. Kokugaku, from which the University takes its name, refers to a field of study that aims to elucidate the development and essential nature of various phenomena and events related to Japan’s traditional culture. Kokugaku is a comprehensive study of Japanese culture which uses material culture (mono), for example ancient texts and artefacts, in order to investigate the kokoro, ‘the heart’ or ‘spirit’ of the Japanese people.

For those accessing the Kokugakun University Museum remotely, the Museum’s collection can also be viewed online. Built with a broad user base in mind, the contents are stored in various formats, including text, image and video, to make cross-content access more intuitive by using different access channels. For example, materials can be searched using the academic database, online dictionary, and digital libraries. The database is now available in Japanese, English and Korean.

The Sainsbury Institute has been the most important collaborative international partner of the Kokugakuin University Museum for many years. In 2009, the Institute and Kokugakuin University signed a research Memorandum of Understanding following a number of successful joint projects. Focusing mainly around the theme of Japanese archaeology, past joint initiatives include the ‘Japanese Archaeology and Cultural Heritage Project’ and the ‘Jomon archaeology in the UK exhibition’. The latter was held in 2001 at the Fitzwilliam Museum in Cambridge to celebrate the 120th anniversary of the establishment of the Kokugakuin University.

Following on from these early joint initiatives between the Institute and Kokugakuin University, in order to further promote the study of Japanese archaeology outside Japan, an important workshop titled ‘Archaeology of Jomon Ritual and Religion’ was organised at the Society of Antiquaries in Burlington House on 6 November 2009. The workshop brought together both young and more experienced academics from Japan, the UK and Europe to exchange views and current research on the theme. Other projects involving the two organisations include the Power of Dogu exhibition held at the British Museum in 2009, and the unearthed exhibition at the Sainsbury Centre for Visual Arts in 2010. In more recent months on 12 December of last year, a workshop about ‘Japanese cultural studies and the formation of international museums network’ was held at the Museum, attended by Dr Simon Kaner, Head of Archaeology and Heritage at the Sainsbury Institute. 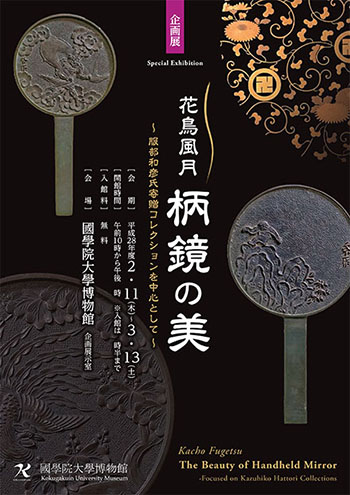 An exquisite selection of hand mirrors from the Medieval to the Edo periods will be on display in the upcoming exhibition, Kachô Fûgetsu (birds and blowers): The beauty of handheld mirrors.

For visitors from nearby, current and forthcoming attractions include the current exhibition, Kami, Budddhas, supernatural beings and humans: the uncanny as seen in Nara-ehon and picture scrolls, which is on until 7 February 2016. This exhibition is a unique opportunity to study figurative representations from Nara-ehon hand-illustrated narrative books and scrolls. From 11 February to 13 March, an exquisite selection of hand mirrors from the Medieval to the Edo periods will be on display in an exhibition entitled Kachô Fûgetsu (birds and blowers): The beauty of handheld mirrors. The objects which will be on display are selected from the nearly 1000 mirrors which were given to the Museum from the renowned collector Hattori Kazuhiko, who donated his collection to the Museum several years ago.

Open Monday to Saturday, 10am – ６pm (closed on weekends and national holidays)
Please check website for opening hours and details