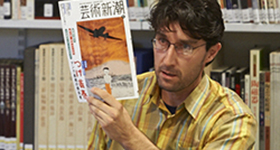 Ryan Holmberg is an art and comics historian. After receiving his PhD in Japanese Art History from Yale University in 2007, he taught at the University of Chicago, City University of New York, and the University of Southern California. He is a frequent contributor to Art in America, Artforum, Yishu, and The Comics Journal. He has edited and translated a number of historically important Japanese comics, amongst them Tezuka Osamu’s The Mysterious Underground Men (PictureBox 2014), winner of the 2014 Eisner Award for Best U.S. Edition of International Material: Asia. Ryan was a Robert and Lisa Sainsbury Fellow at the Sainsbury Institute for the Study of Japanese Arts and Cultures from January to July 2014 and is currently undertaking research that will lead to the publication of his book project Garo and the Birth of Alternative Manga